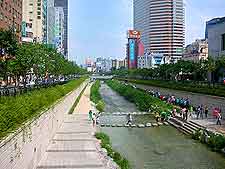 The climate of Seoul is typical of that throughout South Korea, being best described as both continental and humid. Fine summer weather in Seoul sees high temperatures often not far from 30°C / 86°F, contrasting dramatically with the cold, frosty winter climate, when snow is plentiful.

Seoul is also known for its monsoon season and related weather, which tends to arrive each year between June and July, bringing with it much wind and rain. However, this is short lived and by August, downpours are much less likely and the constant sun makes this reliably the hottest month of the year. 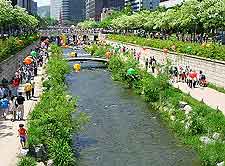 To avoid the monsoon weather and the tourist influx of August, many tourists choose to visit Seoul during April and May, when the spring climate remains pleasantly warm and temperatures hover around 18°C / 64°F or 20°C / 68°F. The endless springtime cherry blossom is an added bonus and fills the city with colour, indicating that heavy winter frosts are a thing of the past.

However, it is the autumn months of September and October which form the high season in Seoul, when sunshine is in good supply, temperatures are upwards of 20°C / 68°F, and the fall colours fill the surrounding forests.