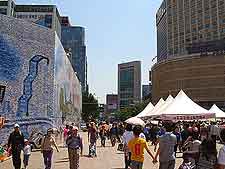 Seoul is awash with cafés, fast food snack bars, eateries and restaurants, and most tastes are catered for, from traditional Korean, Chinese and Japanese, to excellent Italian and French food, as well as the ubiquitous Western fast food dining chains.

There are also many Korean fast food outlets around Seoul, along with as noodle stalls in the markets. For upscale international dining, try the city's five-star hotels, which usually provide more than one restaurant and tend to one of the more reliable bets.

As with elsewhere in Asia, Koreans eat all day and it's not hard to find somewhere to eat whatever the time of day or night. Breakfast can be had from 05:00 onwards at the city gate markets, while burger joints open around 08:00 for breakfasts. Koreans also tend to dine late and many restaurants open until the small hours. 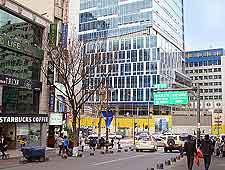 Seoul is as cosmopolitan as they come in the eating stakes, with a diverse range of cuisine on offer. Asian foods are of course the big eats here, including Korean, Chinese and Japanese, but there are also a staggering number of Western eateries. Japanese restaurants in Seoul are particularly good, focusing on sushi and sashimi mainly for the lunchtime crowd. A typical Korean snack, or side dish, is the staple, 'kimchi' - spicy pickled cabbage - which has been eaten by Koreans for literally centuries.

As well as its top of the range Italian eateries, Seoul also has a number of French-style patisseries, including Tous Les Jours and Paris Baguette. Other Western delights include Outback Steakhouse restaurants, and favourites like Starbucks, McDonald's, Burger King, Pizza Hut and Subway. Koreans also have their own 24-hour fast food chain known as Lotteria. 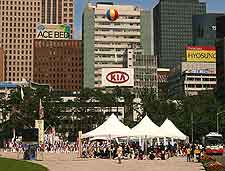 Itaewon Street is one of the best eating streets in Seoul, with loads of restaurants to choose from, including authentic Korean as well as Chinese, Indian and a slew of European eateries. Daehangno is a particularly popular eating area for tourists with its dolled up eateries and special ambiance.

For general day to day eating, most large shopping centres in Seoul have food courts in their basements where you can find a variety of very good, cheap food. In addition, there are noodle stands in every street market and more comprehensive offerings at the city gates' markets. The 24-hour Korean fast food restaurants also come with a wide variety of foods, such as 'odeng', 'mandu', and 'udon'. 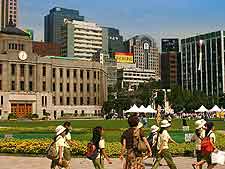 A good well-priced eatery in Seoul is Sadongmyenok, on Insadong 5-gil, which is especially well known for its homemade meat 'n veg-stuffed dumplings (manduguk). There are also English menus here. If you are near the Dongdaemun Stadium, the Ala-Too Cafe is another cheap favourite, with Russian and Central Asian restaurants.

If you have deep pockets, give Hanwoori a try, a posh Korean restaurant on Nonhyeondong Street, which specializes in 'shabu-shabu'. This type of eating is very sociable, where you cook your own food by putting slices of meat and vegetables into a pot in front of you. The pots are electrically heated here but standard shabu-shabu places in town heat the pots over coals. Other class dining establishments in Seoul of note are the J Pub Ryu, with its amazing menu of Japanese fusion, and the Once in a Blue Moon restaurant / jazz bar, which has a fine atmosphere and food.

The New Delhi Restaurant on Itaewon is one of the best restaurants in Seoul for curries and is reasonably-priced. The chicken vindaloo and garlic nan bread are particularly good. If you hanker for some Western fast food, there is no shortage of familiar burger joints.