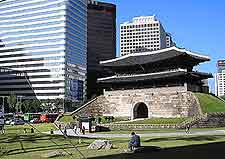 Seoul is a modern city of glitzy skyscrapers, yet also manages to boast a wealth of cultural sights, historical landmarks and notable monuments. The good thing is that most of the finest palaces are set within Seoul city centre, while many of the old city gates still remain and are home to popular markets.

The Seoul Tower is a monumental skyscraper and amongst the city's most showy modern-day landmarks, being worth climbing for the superb views. For even greater heights, make a day trip to summit of Mount Pukhansan, where wild flowers abound. 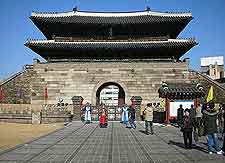 Address: Namdaemun Gate, Namchang-dong, Seoul, South Korea, KR
Tel: +82 02 3707 9451
The Great South Gate (Namdaemun Gate), or Sungryemun, is a renowned Seoul icon and National Treasure Number One. It is a must-see for any visitor to Seoul and is especially fine at night as it is beautifully lit. The gate has been damaged over the years, including in early 2008 through fire. Combine a visit to the Namdaemun Gate with a visit to the nearby Namdaemun Market.
Open hours: daily
Admission: free 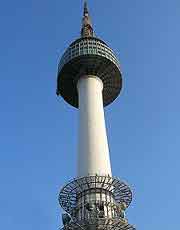 Address: Yongsan-dong, Seoul, South Korea, KR
Tel: +82 02 3455 9277
The N Seoul Tower is situated atop Mount Namsan and was one of the highest landmarks in the entire world at the time of its construction in the 1960s, measuring almost 240 metres / 790 feet. You can see the tower from virtually any point in the city, while views from its revolving observation deck are panoramic and take in the entire city. There are also several exhibition halls in the tower.
Open hours: daily - 09:00 to 02:30
Admission: charge, discount for children and seniors

Address: Gwanghwamun, Seoul, South Korea, KR
Admiral Yi Sun can be seen on a 100 Won coin at any time, yet the Admiral Yi Sun Shine Statue shows him off in his best light. The statue is a major Seoul landmark and commemorates the 16th century admiral that designed the metal-clad 'turtle boat' warship known as a 'geobukseon'. They were used to fight the attacking Japanese navy of the time and proved decisive in many Korean victories. Visitors can see a replica of a geobukseon at the War Memorial and Museum.
Open hours: daily
Admission: free 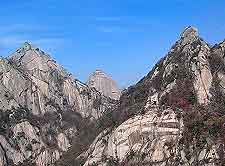 Address: Uijeongbu, Seoul, South Korea, KR
Tel: +82 31 873 2791
The huge, bald, beautiful Mount Pukhansan is a chunk of granite near to Seoul that presides over a striking valley, and is ideally places for an easy day trip. The valley is loaded up with rare flowers and plants, and features scores of temples scattered all over the place. You will also find the historical Pukhan Fortress in this area.
Open hours: daily
Admission: free 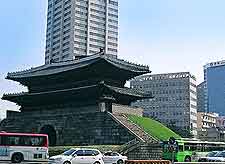 Address: Seoul, South Korea, KR
The Gate of Rising Benevolence is officially known as Heunginjimun and is the old eastern gate of the city. It is not as striking and architecturally stimulating as Namdaemun, but is definitely worth the look all the same, especially as the latter is under extensive repairs. The associated Dongdaemun Market is a must-see and is more impressive than Namdaemun's market.
Open hours: daily
Admission: free