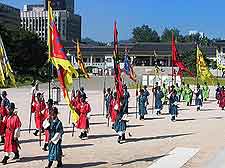 Seoul has a variety of fun festivals and events throughout the year, which celebrate the culture of the city, as well as religion, holidays and art. Major events to take note of are the Hi Seoul Festival, the Seoul Tano Festival in June, and the busy Lunar New Year, which usually happens either in late January or early February.

Visitors are always welcome to join in the city's celebrations, making holiday times the perfect time for a visit. Things do get busy, however, so remember to book in advance if you want to be here for a major event.