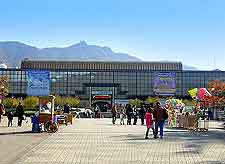 The capital of South Korea is a bustling metropolis of skyscrapers, thriving markets, quality tourist attractions, and ancient temples and palaces. There are many modern, fun attractions here, too, and getting around the city of Seoul is a breeze.

If and when you tire of the city noise, there are plenty of parks and gardens to duck into, as well as lofty city outposts to take in some nature. For more fast-paced family entertainment in Seoul, make a beeline for the attractions within the ever-popular Children's Grand Park amusement park. 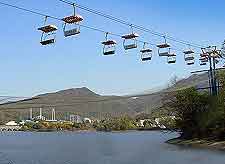 Address: Seondong-gu, Seoul, South Korea, KR
Tel: +82 02 450 9311
Seoul's Children's Grand Park is a large amusement park within a park setting and is perfect for restless kids. There are dozens of fun rides and enjoyable attractions here for all ages, as well as a zoo complete with lions, tigers, and elephants. An elephant show features nine beasts happily playing soccer, while chimpanzee and seal shows at the zoo are always very popular. The Children's Grand Park also has a wetland eco area with boardwalk, and the glasshouse botanical garden has cacti and bonsai trees, together with an interesting folk museum.
Open hours: daily - 09:00 to 22:00, seasonal variations apply
Admission: charge

Address: Yeouido, Seoul, South Korea, KR
Tel: +82 02 789 5663
The 63 Building is Seoul's tallest, best looking skyscraper and has several worthwhile attractions inside, many of which will be quite unexpected. The Observation Deck on the 60th floor offers fine views of the city, and the Plaza Fountain Buffet for eating. Other attractions in 63 Building include the Sea World Aquarium, with its sharks, penguins, and turtles; and the IMAX cinema. The 63 Building is just a 15-minute walk from the subway and being so tall, quite impossible to miss.
Open hours: daily - 10:00 to 21:00
Admission: free, charge for attractions 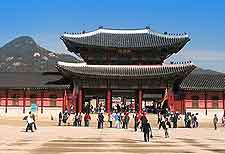 Address: Yulgukno, Seoul, South Korea, KR
Tel: +82 02 732 1931
Gyeongbok-gung is Seoul's grandest palace. It was burnt to the ground by the Japanese in the late 1600s, and again in the early 1900s, yet it has largely been restored to its former beauty. Gyeongbok-gung was also the seat of power for hundreds of years before its sacking by the Japanese, and the delectable grounds feature the Korean Folk Museum and Joseon Palace Museum.
Open hours: daily except Tuesday - 09:00 to 17:00
Admission: charge 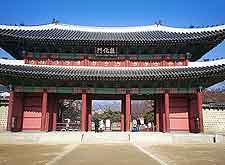 Address: Yulgukno, Seoul, South Korea, KR
Tel: +82 02 762 8262
The 600-year-old Changdeok-gung Palace is a UNESCO World Heritage site and second only to Gyeongbok-gung for its looks and importance. It too has seen extensive restoration work and is as dazzling and elegant as it no doubt was when it was first built. Must-see attractions at Changdeok-gung include the city's oldest stone bridge, the blue-tiled royal office, and the throne hall.
Open hours: daily
Admission: guided tours - charge 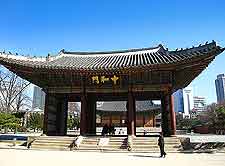 Address: Seoul, South Korea, KR
Tel: +82 02 771 9951
Deoksu-gung Palace is different from the other major palaces in Seoul, being nothing short of a fusion of Eastern and Western styles. This appealing attraction can be found in downtown Seoul, across from City Hall, and hails from the mid-1400s. Deoksu-gung Palace used to be a posh villa, but became a palace after King Seojo moved in. The palace features delightful gardens that contain stunning architectural styles best seen in the tea pavilion.
Open hours: Tuesday to Sunday
Admission: adults charge, discounts for children under 18, children under seven years and seniors free 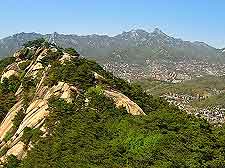 Address: Inwangsan, Seoul, South Korea, KR
The 335-metre / 1,100-foot Mount Inwang is home to the Inwang Temple, as well as the city's famed Guksadang shrine. The whole area is worthy of exploration, with staircases, creeks, the Zen Rocks' bizarre rock formations, as well as the Seoul fortress. Luckily there is a map board well placed near the entrance to tell you where things are.
Open hours: daily
Admission: free