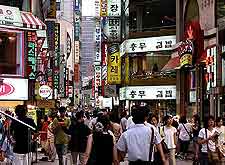 The shopping opportunities within Seoul are simply enormous, ranging from street markets and local galleries, to department stores and glitzy malls. Tourists will always be pleased to find duty-free shopping at Seoul's biggest department stores, and also within the city's very own Incheon International Airport.

For a spot of upmarket shopping in Seoul, pay a visit to the Apgujeong area, where deluxe department stores, beauticians and street cafes are in plentiful supply. Particularly popular here is the Galleria department store, while further classy shops reside close to the Yeongdeungpo Market, just a stone's throw from the Yeouido Park. 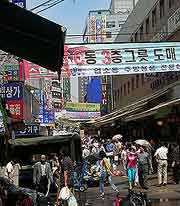 Although the glamour and the appeal of the glitzy department stores is hard to beat, the markets of Seoul offer a whole different shopping scene and the chance to haggle over the price.

The biggest of all the traditional street markets in Korea is the Namdaemun, which is spread around underground arcades and stays open well into the evening, featuring many stalls selling tasty hot snacks. The Dongdaemun Market is also very established in Seoul and very old-fashioned in its character, with some of the adjacent shops remaining open all through the night. 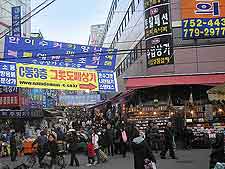 However, for something a little more on the modern side, then the shopping malls of Seoul are simply colossal, with two individual Techno Mart malls comprising some 4,000 stores in total, spread over eight floors and located at Gangbyeon station and at the Sindorim station.

Seoul's underground shopping complex known as the COEX Mall also deserves a mention, being conveniently alongside the COEX Convention and Exhibition Centre and the South Korean World Trade Centre.