Banten covers a large chunk of West Java and therefore its main landmarks and historical monuments can be quite spread out. Various temples and mosques are dotted around Banten and are much photographed by tourists wishing to preserve their memories in the form of a photograph.

One of the most noticeable of Banten's landmarks is the Anyer Lighthouse, which dominates the skyline of Anyer and can be seen for literally miles. Built by the Dutch in the latter part of the 19th century, the Anyer Lighthouse also goes by the name of the Tower of Bojong and was commissioned in 1885 by King Willem III.

Address: Anyer, Banten, Indonesia, ID
The Anyer Lighthouse was constructed as a memorial in 1885 for those who lost their lives when the Krakatoa volcano erupted just two years before. The lighthouse towers more than 40 metres / 131 feet in height and its very hard to miss, being bright white and offering exceptional views from the top.
Open hours: daily
Admission: free

Address: Pamarican, Banten, Indonesia, ID
The most historical Chinese landmark in the whole of Banten, the Avalokiteshvara Temple was built in the 1860s and stands directly outside of the Speelwijk Fort. Renovated during the 1930s, the Avalokiteshvara Temple remains in a good state of repair and is well worth a look, since its architecture is very brightly coloured and typically oriental in its appearance, with exquisite hard-carved dragon sculptures.
Open hours: daily
Admission: free

Address: Banten Village, Banten, Indonesia, ID
Located in the village of Banten, the Mesjid Agung is a magnificent mosque and is the region's main landmark. Dating back to the middle of the 16th century, the Grand Mosque is an excellent example of historical Islamic architecture at its best. The roof of the mosque comprises five layers and a minaret. Close by is a busy market, an old graveyard and the Tiyamah Monument.
Open hours: Tuesday to Sunday - 09:00 to 18:00
Admission: charge

Address: Kroya, Banten, Indonesia, ID
The Palace of Kaibon is known locally as the Keraton Kaibon and is to be found within the village of Kroya and alongside the Old Banten road. Sited some 7 km / 4 miles from Serang and just a short distance from both the Surosowan Palace and the Mesjid Agung Banten, the Keraton Kaibon was built in the early part of the 19th century and was commissioned by Sultan Muhammad Raffiudin, who gave this landmark building to his mother, Queen Asyiah, as a gift. Today, the palace lays in ruins and just suggests its former glory and opulence.
Open hours: daily
Admission: free

Address: Pamarican, Banten, Indonesia, ID
Found on the north-westerly side of Surosowan and in the village of Pamarican, the Speelwijk Fort was completed in the early 1680s by the Dutch. This ancient fortress was expanded soon afterwards and enjoys a seafront setting, where the threat of attacks from pirate ships was once a reality. Although the Speelwijk Fort is rather crumbing, its four bastions are still very much standing. Inside the fortress itself is an old Dutch cemetery, while close by and to the east are some further tombs.
Open hours: daily
Admission: free

Address: Banten, Indonesia, ID
Constructed in the early part of the 16th century, during Sultan Maulana Hasanuddin's reign, Surosowan Palace covers an area of around 3 hectares / 7.5 acres and suffered a large amount of damage at the beginning of the 19th century, when the Dutch attacked. Today, the Surosowan Palace lies in ruins, with piles of red bricks and the remains of the walls, which once stood 2 metres / 6.5 feet high and were up to 5 metres / 16.5 feet deep. Related exhibits discovered during past excavations are displayed onsite.
Open hours: daily
Admission: free 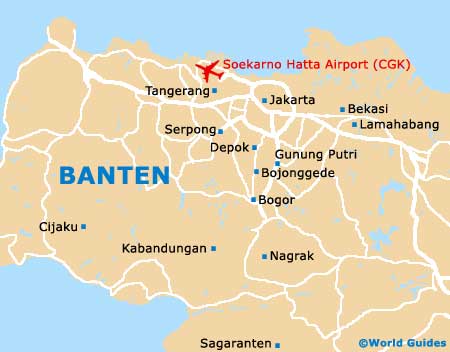