As one of the ancient royal capitals of central Java, Yogyakarta has a history that is a long and colourful timeline of royal strife, colonialism and rich Javanese culture.

It was once part of the powerful Mataram Kingdom, until Dutch tactics exploited a rift between the royal houses and split the kingdom into two competing cities. This quest for autonomy carried on into the struggle for Indonesia independence in the 1940s, but today this popular tourist destination is known for its rich Javanese culture and art.

A Split in the House of Mataram

The modern history of Yogyakarta can be traced back to the civil war that erupted between the two bloodlines of the powerful Mataram Kingdom ruling over much of central Java in the 1700s. The rift began when Sunan Pakubuwono II agreed to submit to the whims of the Dutch East India Company and its colonial government. His younger brother Sultan Hamengkubuwono I was against Dutch involvement, because he knew the Javanese people were being used as slaves for Dutch businesses.

Sultan Hamengkubuwono I fought his brother's forces until he finally defeated them. As a result of the war, the sultan took the southern region of the Mataram Kingdom, officially creating the city and kingdom of Yogyakarta on 7th October 1756. His brother Sunan Pakubuwono II took the northern area and built his capital in Surakarta.

The sultan was seen as a hero by the Javanese for fighting back against Dutch power. To honor this effort for Indonesian autonomy, Yogyakarta is the only province in Indonesia still headed by a king, granted the title of Special Administrative Region by the new government in 1950. Sri Sultan Hamengkubuwono X is the current ruler of the Yogyakarta province, a direct descendent of this royal Mataram line.

The Fight Against Dutch Colonialism

Yogyakarta has been right at the centre of local struggles for independence for the past 300 years. Many of Indonesia's most successful fights against Dutch colonial rule occurred around Yogyakarta. Prince Diponegoro, another local Javanese hero, waged a furious war against the Dutch from 1825 to 1830.

In reality, most of the archipelago would eventually come under the rule of the powerful Dutch East India Company, and by extension the Dutch. They established an infrastructure that has left colonial Dutch gabled houses and government buildings that stand to this day in the city centre.

Slaves were exported to Holland, a few to the Cape Province in South Africa (where a Malay population still thrives), and even as far as Surinam and the Dutch Antillies in the Caribbean territories. Spice was their main export.

The Republic of Indonesia

A century later when Indonesia claimed independence after WWII in 1945, the Dutch again tried to step in and take over when they occupied Jakarta (known as Batavia at the time). During this final struggle for freedom from Dutch colonialism between 1946 and 1949, Yogyakarta formed half of the original Republic of Indonesia. For a brief period, the city was the capital of the new nation.

Education, the arts and traditional culture have always played a major role in the history of Yogyakarta. Indonesia's first university was established in the city, and by most opinions, Yogyakarta is the current hub of traditional Javanese dance, music, art and spirituality. Living proof, if you will, that fighting for your heritage can lead to great things.

Nowadays, this city attracts tourists who come to visit a far more impressive site of Javanese history, Borobudur, the 9th-century complex of Buddhist pagodas situated some 25 km / 16 miles to the north-west of Yogyakarta. 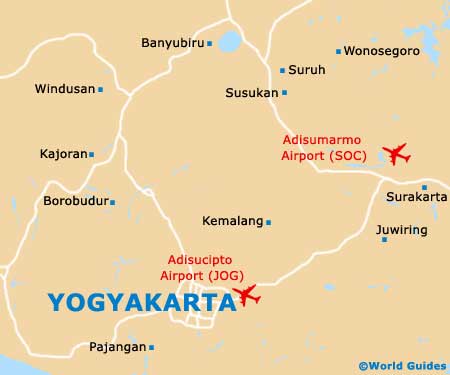