A prominent destination in Central Java, most people tend to refer to the Indonesian city of Surakarta as simply Solo. Together with nearby Yogyakarta, Solo was once part of the former Mataram kingdom and has grown into a busy and sizeable city, with wide streets, vibrant local markets, a very apparent Javanese cultural heritage and dramatic views of the region's famous active volcano, Mount Merapi.

Tourism is definitely on the up in Solo and tourists will find that the locals really are extremely friendly and welcoming. The city is now a notable textile centre, specialising in wax-dyed 'batik' fabric, although is also known for its performing arts and related academies. Tourist information in Solo is available at the tourist office on the bustling Jalan Slamet Riyadi, while further desks stand within the bus and railway stations.

Many tourists decide to take a guided tour of the city when they first arrive in Solo, which comprises a number of different excursions and is usually bookable through most hotels. If you are staying in Solo as part of a family holiday, then the Sriwedari Amusement Park is likely to feature on your itinerary of things to do. This popular theme park has fast rides, sideshow stalls, Indonesian 'wayang' puppetry and various entertainment. The Jurug Zoo (Taru Jurug Animal Park) is also worth exploring if you have children with you, or simply fancy riding a camel. More information about Solo Tourist Attractions.

The Jalan Slamet Riyadi serves as a very important and busy central thoroughfare in Solo, and is lined with hotels, restaurants and places to visit. Many of the city's most obvious landmarks are generally located close by, such as the splendid 18th-century palace on the Jalan Sasonomulyo, which goes by the name of the Kraton Surakarta (Kraton Kasunanan) and is quite a sight to behold. Tourists searching for the most impressive buildings in Solo may like to check out the Puri Mangkunegaran palace pavilion, the Great Mosque of Surakarta (Mesjid Agung), and the Sahasra Adhi Pura Temple. More information about Solo Landmarks and Monuments.

Providing visitors with information about the city's heritage, the museums of Solo are quite reasonable and often a little diverse. The Batik Danar Hadi is a good place to come and learn more about Solo's traditional hand-waxing and dying techniques, used to create elaborately decorated fabrics for literally centuries, many of which are still sold today at the city's massive textiles market, which remains the biggest of its kind on Java. For valuable royal treasures and heirlooms, the Sasono Sewoko Museum within the Kraton is a fascinating cultural attraction, while the Radya Pustaka Museum is quite different and specialises in traditional antiquities and objects, such as the 'gamelan' musical instruments, made out of bamboo. More information about Solo Museums and Solo Art Galleries.

There is much to explore within Central Java and Solo enjoys a convenient setting for some quality excursions. Tourists holidaying in Solo will be able to take day trips to the spectacular temples of Borobudur (Buddhist) and Prambanan (Hindu), climb to the top of Mount Lawu (Gunung Lawu) at Candi Ceto, and sightsee in the neighbouring cities of Semarang and Yogyakarta. Also close by is the elaborate royal burial hill of Mangadeg, the archaeological site at Sangiran, the sleepy town of Sarangan, and the hill resort of Tawangmangu. More information about Solo Attractions Nearby. 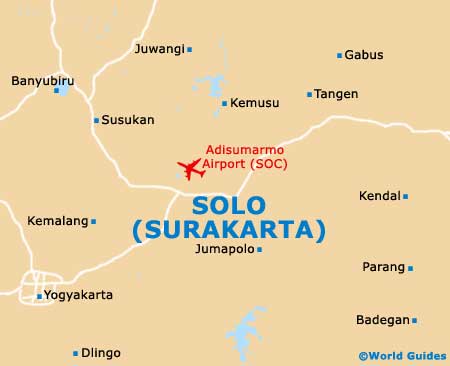