Java's energetic port city of Semarang stands on the north coast and successfully manages to capitalize on its popular location. Semarang is very much a mixture of old and new Java, with a modern southerly 'new town' area and a more historical 'Outstadt' area on its northerly coastal plain, next to the Banjir canals and Yos Sudarso Bay.

In recent years, Semarang has enjoyed a noticeably increased tourism scene and global holiday makers now come here to enjoy its colonial architecture and explore its rambling Arab and Chinese quarters. When you first arrive in the city, do consider paying a visit to the Central Java Tourist Information Office, which is located on the Jalan Pemuda and near to the Chinese market. And do leave enough time for a mammoth shopping expedition around the Simpang Lima complex.

The coastal city of Semarang features a selection of enticing beaches, suiting families and sunbathers alike. Marina Beach is one of the most popular in the Semarang area and is a good place to have a go at water skiing or snorkelling. Scenic pleasure cruises around the shoreline are available at Marina Beach and are also worth noting. Very nearby and on the island of Panjang is the tranquil Kartini Beach. If you are simply wishing to hang out with the locals, then the Semarang Harbour is the place to do it and provides the opportunity to observe some traditional 'Pinisi' sailing ships. Families often favour Semarang as a holiday destination due to its high concentration of theme parks and water parks, such as the Kampoeng Wisata, the Taman Mini Jawa Tengah and the TBRS Amusement Park. More information about Semarang Tourist Attractions.

Much of central Semarang is a pleasant mixture of modern structures, Dutch colonial buildings lining the Jalan Jenderal Suprapto, and Chinese architecture, such as both the Sam Po Kong Temple and the Tay Kak Sie Temple. Landmarks in Semarang don't come much more impressive than its Grand Mosque (Mesjid Besar), which is the largest in the whole of Central Java and dates back from the late 19th century. Also worth looking out for is the Pagoda Avalokitesvara, the Tugu Muda Monument, and the Lawang Sewu Building, which has become affectionately known as the 'Building of a Thousand Doors and Windows', due to its rather excessive number of doors and windows. More information about Semarang Landmarks and Monuments.

As the capital of Central Java, the status of Semarang is clearly reflected in its museum offerings. The city's two Jamu Museums are especially interesting and are brimming with information about local herbal medicines, which are manufactured in Semarang in enormous quantities. To learn more about the history of the city and surrounding region, then the Ronggowarsito Museum is on hand, or if you prefer something a bit more lighthearted, then check out the fun Indonesian record breaking exhibits at the Museum Rekor Indonesia - MURI. Art in the city is represented at a number of galleries, with the best being the Gallery Semarang on the Jalan Taman Srigunting, and the Museum Ronggowarsito on the Jalan Abdurrahman Saleh. More information about Semarang Museums and Semarang Art Galleries.

Central Java is full of exciting and enticing tourist attractions, and Semarang is just a short journey from some of the very best that this part of Indonesia has to offer. Famous throughout Java is the ancient Buddhist temple of Borobudur, which dates back to the 9th century and was built with more than two million blocks of stone. Especially close to Semarang are the towns of Ambarawa, Demak, Jepara and Kudus, while for something larger, consider an excursion to the outlying cities of Solo (Surakarta) and Yogyakarta, both of which lie to the south-east. More information about Semarang Attractions Nearby. 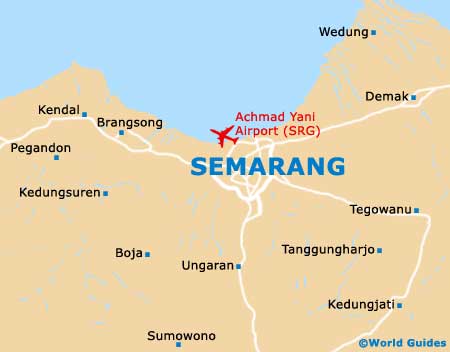