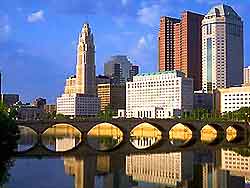 Columbus is an enormous and exciting city and capital of Ohio (OH), in Franklin County. The state's largest city, Columbus is named after Christopher Columbus and lies next to the Scioto River.

Famous for being home to the vast Ohio State University (OSU), America's second-largest university with 60,000 students, other notable attractions in Columbus include the German Village, full of restored 19-century houses, cobbled streets and Queen Anne-style architecture, the spectacular Ohio Statehouse capitol building, and a number of impressive museums.

There are plenty of affordable hotels in Columbus, many of which are concentrated in the city center, along the Corporate Exchange, International Gateway, Port Road, Tuttle Park Place, Zumstein Drive and nearby highways. Representing all levels of accommodation and budgets, hotel rooms in Columbus should always be reserved in advance. Additional hotels are also located conveniently close to Southwest Ohio International Airport (RSW), which stands just 7 miles / 11 km from central Columbus. More information about Columbus Hotels.

Tourism is now an integrated part of life in Columbus and the city's main tourism outlet is the Greater Columbus Convention and Visitors Bureau, which can be found on North High Street. Full of helpful tourism information about sightseeing and excursions around Columbus, the tourist information center offers a wealth of colorful brochures about major tourist attractions and tourism in many of Columbus's neighborhoods, including Arena area, the Brewery district, Downtown Columbus, the German Village and the Short North district. 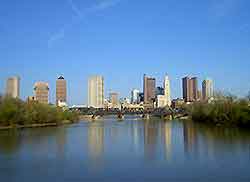 Other top tourist attractions in Columbus include the McKinley Memorial - an important statue created around 100 years ago, standing outside the Ohio Capitol; Santa Maria - a replica of Christopher Columbus's famous ship, now an important historical landmark; Franklin Park - a popular park is located next to downtown Columbus, with landscaped gardens, a large conservation and botanical collections; Goodale Park - is one America's oldest parks, created in 1850; and North Bank Park - situated along the scenic banks of the Scioto River, with walking and cycling trails. More information about Columbus Tourist Attractions and Columbus Landmarks. 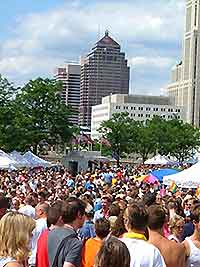 Some of the main museums and art galleries in Columbus include the A.D. Farrow Co. Harley-Davidson Museum - near to downtown Columbus, housing an impressive collection of vintage Harleys and memorabilia; the Columbus Center of Science and History - with many interactive exhibits covering a diverse range of subjects, together with a dome theater and general science information; the Jack Nicklaus Museum - celebrating the life and achievements of this golfing great, who originated from Columbus Ohio Historical Center - providing an in-depth overview of Ohio history, with information about Native American Art; and the Columbus Museum of Art - housing a large selection of art, including French Impressionist paintings and contemporary pieces. More information about Columbus Museums and Columbus Art Galleries.

Tourist attractions close to Columbus include Beulah Park - Ohio's original horseracing track, dating back to 1923, regularly hosting carnivals and events; Longaberger Homestead - a historic homestead with a number of period features, situated to the south of Columbus; the Motorcycle Hall of Fame Museum - with information about the history of motorcycling and around 150 authentic bikes; Newark Earthworks State Memorial - the world's largest system of geometric earthworks, created around 2000 years ago; and Six Flags Wyandot Lake - a major family attraction, with more than 60 rides and numerous waterslides. More information about Columbus Attractions Nearby.