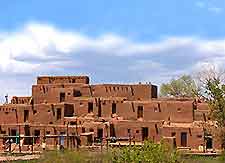 The thriving tourist destination that is Taos is one of the most popular locations in New Mexico (NM). Pronounced 'T-ouse', Taos began life as a Spanish Colonial outpost and today, is still the home of a long-established population of Native Americans. The town is composed of three distinct areas, central, the nearby Ranchos de Taos, and the local community of Taos Pueblo.

Without a doubt, the Taos Pueblo is the town's main tourist attraction and dates back to the 15th century. Standing in the heart of some truly spectacular scenery, the town is close to the scenic Rio Grande, Taos Plateau and also the impressive Sangre de Cristo Mountains. The town is known for its exceptional outdoor activities, which include summer white-water rafting around the Taos Box area, and winter skiing in the nearby Ski Valley, between December through April. 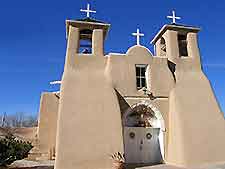 Tourism in Taos is a notable part of town life and tourists are welcomed to the area. The main tourist information center is the Visitors Center on the corner of the Paseo del Pueblo Sur and Paseo del Canon. Happy to help you with all aspects of your stay, the Taos Visitors Center is home to a wealth of leaflets about the region's top tourist attractions and accommodation, together with maps and general tourism advice.

With a range of accommodation, including historic local hotels and modern chain motels, lodging in Taos suits all budgets. Hotels in the area are particularly concentrated around the NM 68 (Paseo del Pueblo Sur and Norte), close to the nearby Taos Regional Airport (TSM), and around the popular Taos Ski Valley resort, which is just a short journey from the town center and offers many outdoor activities throughout the year. More information about Taos Hotels. 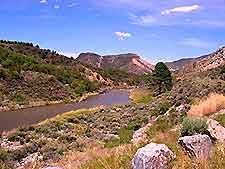 Taos has a variety of tourist attractions, including the Rio Grande Gorge Bridge - with spectacular views above the Rio Grande River; Kit Carson Park - a popular recreational area, with many peaceful picnic areas and important headstones; Cordova - a nearby town known for its intricate wood carvings and historic Rio Chiquito Church; and Truchas - close by, featuring a famous range of mountains and scenic views. More information about Taos Tourist Attractions.

Some of the most visited museums and art galleries in Taos include Blumenschein Home and Museum - a popular attraction with many spectacular works of art; Governor Bent Museum - offering an insight into the life of one of New Mexico's governors; Kit Carson Home and Museum - showing life as it was in the Wild West, with many displays and exhibits; the Millicent Rogers Museum - featuring an impressive collection of Native American and Hispanic handicrafts; and the Taos Art Museum - displaying a profusion of exhibits by local New Mexican artists. More information about Taos Museums and Art Galleries.