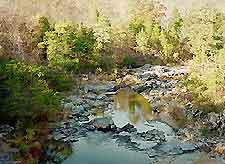 Made famous by the Beverly Hillbillies TV show in the 1960s, the small city of Branson, Missouri, has been a favorite holiday destination for many years, suiting both Missouri residents as well as those from across the country. It has become particularly well-known for its plethora of theatrical productions and music events.

A 'newish' city by American standards, Branson is mostly developed as a modern recreational center, an effort that has taken place in the last 50 years of its history.

Branson's first resident was local postmaster and general store owner Reuben Branson, after whom the town was named. He arrived in 1882 and was joined by a few homesteaders, one of whom purchased a large cave in the area, intending to use it as a tourist destination and charging visitors for entry. The potential of the area for tourism had been improved by the completion of the nearby Powersite Dam, forming Lake Taneycomo, although it took 100 years for such potential to be fully realized. 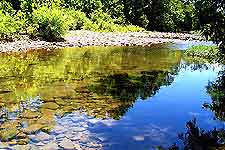 By 1950, the town was waking up to the true potential of tourism, with an enterprising local couple having leased Marble Cave - renaming it Marvel Cave and holding regular square dances in its now modernized and well-lit spaces. The enterprise took off, resulting in the opening in 1960 of Silver Dollar City, a recreation of a Wild West frontier town, with actors replaying famous events from the early days of Branson history and that of the wider region.

Expansion as a Visitor Destination

The 1960s also saw Branson's Old Mill Theater put on a production of the dramatized version of Harold Bell Wright's the Shepherd of the Hills, a novel set in the region and written in 1907. This proved so popular that it's still running today. Several years earlier in Branson history, before the play was staged, another dam was constructed on the White River, creating Table Rock Lake, which became yet another visitor draw.

Other innovations around this time in the history of Branson were the Baldknobbers Jamboree and the Sons of the Pioneers shows, both still in production today. Additionally, the landmark Inspiration Tower was constructed, while the Harold Bell Wright Museum opened in the same building as the World's Largest Toy Museum. Theaters began to spring up all along Highway 76, which was later christened 'The Strip'. 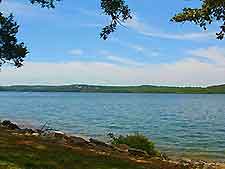 By the late 1980s, there were almost 50 theaters set around town, with musical and theatrical groups giving nightly performances, many of which were nostalgic renderings, including traditional country music and dance. Stage sets, modern lighting equipment, costume changes and much more were brought in, and different styles of music were introduced.

In 1983, the nearby Swiss Villa Amphitheater opened, attracting rock bands such as Def Leppard and Steppenwolf, and stars such as Ozzy Osborne. This cemented the demand for huge music venues, although it closed some 17 years later. At the same time in Branson history, country music star Roy Clarke set up his own celebrity theater, sparking a rush to develop similar large, modern entertainment venues.

To cope with the influx of tourists, the city got its own privately owned commercial airport in 2009, with a range of mountain tops flattened to accommodate the runway. Nowadays, Branson is home to the Titanic Museum, a host of smaller fun houses and other attractions, many of which are located in the new waterfront development on Lake Taneycomo, along with an outdoor shopping mall, restaurants and a convention center.