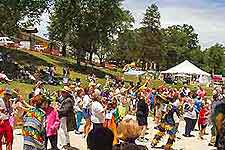 The social diary of Branson contains a series of live performances which are continuously being updated. Considering that this is a relatively small city, there are usually plenty of things to do here, ranging from annual festivals to concerts at its plethora of theaters and entertainment venues, such as the Hamner Barber Theater on the Shepherd of the Hills Expressway.

Notable events worth looking out for include the Annual Hot Winter Fun Big Show each February, followed by the Branson Feast every April, the Plumb Nellie Days Hillbilly Festival and Craft Show in May, and summer Mardi Gras processions each June.

On 4th July, Rockaway Beach proves to be a very appealing place to hang out, with its family themed activities as part of the yearly Food and Fun in the Park Fireworks Display. Later on in the year, the Autumn Family Feast is another get-together worth looking out for if you have children on tow during your visit to Branson.