Martha's Vineyard has long been a popular place to stay in Massachusetts and contains many notable hotels, coastal resorts and accommodation options. Lodging rates in Martha's Vineyard are variable and very much depend upon the season, with hotels being at their most expensive during the peak summer months and considerably lower in winter.

Hotels can quickly become fully booked and therefore reserving accommodation in advance, before arriving on Martha's Vineyard, is essential. This is particularly so if you crave views of either the Nantucket Sound or the Vineyard Sound. Next to the South Beach State Park and within Edgartown, the Winnetu Oceanside Resort soon fills up and is well-known for its southerly coastal panoramas of the Atlantic Ocean.

The island of Martha's Vineyard offers a number of distinct towns and resort areas, ranging from budget hotels and campsites, to luxury beachfront accommodation. The Down-Island area is made up of several popular towns and villages - Edgartown, Oak Bluffs and Vineyard Haven. Close to amenities, shops and restaurants, this region offers some of the island's most popular hotels. Edgartown and Oak Bluffs are the only two towns permitted to sell alcohol and really do come alive at night, with Oak Bluffs in particular being known for its lively bars and nightclubs. 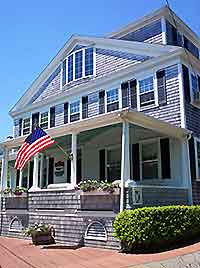 Notable hotels in the Edgartown area of Martha's Vineyard island include the historic Edgartown Inn North Water Street, which dates back to the early 18th century and is just a stroll away from the Lighthouse Beach. Also of note in Edgartown is the Victorian Inn, the Hob Knob Inn, the Clarion Heritage Hotel and the Shiretown Inn, close to the harborfront.

Popular hotels in Oak Bluffs include the Surfside Motel, next to the main ferry terminal and beach, and the scenic Island Inn, which overlooks a nearby golf course (the Farm Neck PGA Golf Club).

The main hotels in the Vineyard Haven area of Martha's Vineyard include the charming Captain Dexter House, which was built in the mid-19th century and is packed with character. Also of note is Martha's Place, close to Owen Park Beach, and the Oceanside Inn, where magnificent views of the harbor can be expected as standard. 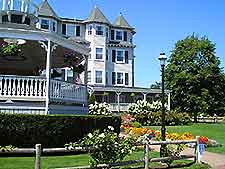 The Up-Island area of Martha's Vineyard is another popular part of the island and includes Aquinnah (formerly Gay Head), Chilmark, Menemsha and West Tisbury, where lodging comes in the form of the Noah's Ark Bed and Breakfast on State Road, and the Cleaveland House on Edgartown Lane. These towns offer a number of friendly inns, modern apartments and similar self-catering accommodation, and beachfront houses and cottages, which can often be rented per week.

The most popular hotels in this part of Martha's Vineyard include Aquinnah's Duck Inn, offering endless views of the Atlantic Ocean, Chilmark's Blueberry Hill Inn, which is surrounded by glorious countryside, and Beach Plum Inn in Menemsha, known for its impressive restaurant, private beaches and formal gardens.