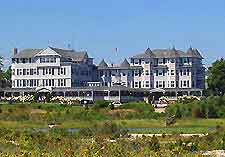 A charming island lying off Massachusetts' picturesque Cape Cod, Martha's Vineyard is an extremely popular spring and summer break destination for north easterners. As you would expect from its name, the island's economy is agriculturally-based rather than marine-based as with neighboring Nantucket Island, with winemaking estates spread across the island's hinterland region.

In the spring and summer months, Martha's Vineyard is engulfed by tourists who flock to the island for shopping, dining, partying and sunbathing on the idyllic beaches. In the off-season, on the other hand, the island becomes friendlier and more relaxing, making Martha's Vineyard a perfect vacation destination at any time of year. 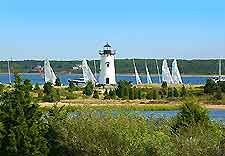 Founded in 1642, Edgartown is the oldest of Martha's Vineyard's settlements. Located on the eastern part of the north coast, the village is one of only two Martha's Vineyard districts where you can drink alcohol in public establishments. As such, Edgartown has some of the island's most tasteful licensed restaurants, pubs, bars and nightclubs, although the overall atmosphere is calmer than at Oaks Bluff to the west. Much of the accommodation is located here too, being just a short drive from both the port of Vineyard Haven and the Martha's Vineyard Airport. Edgartown is great to stroll around, with dozens of old stately buildings, lovely gardens and plenty of white picket fences, and it was here that the film Jaws was shot. 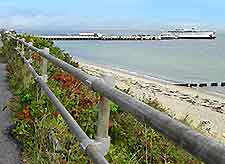 Oaks Bluff is where it's all happening during the spring and summer season, being the focal point of the island's nightspots. Apart from Edgartown, Oaks Bluff is the only village on Martha's Vineyard selling alcohol, and its more modern and touristy ambiance appeals to many of the younger visitors to the island. Most of Martha's Vineyard's nightspots are located in Oak's Bluff, with plenty of bars, clubs, discos and licensed restaurants, as well as plenty of specialty stores and accommodation. The town is also well-known for its beautiful public beach and the timeless Flying Horses Carousel.

Although there is another ferry harbor at Oaks Bluff, Vineyard Haven has the most frequent and regular year-round service and is therefore the first sight of Martha's Vineyard for most tourists. The village has plenty of shops and eateries, serving the needs of visitors with time to kill before their ferry departs. The harbor itself is very picturesque, and it's very relaxing to sit at a quality café enjoying the marvelous views. 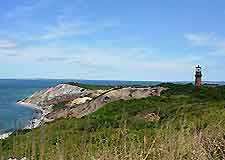 Formerly known as Gay Head, Aquinnah is a lovely village situated on the far western edge of Martha's Vineyard island. Famous for its cliffs and lighthouse, Aquinnah is also home to the Wampanoag Indians, who have a fascinating traditional cultural history, which tourists can experience at the enthralling Wampanoag Museum.

With some of the most spectacular coastal scenery on the island, the Chilmark region is a quiet area filled with rural grazing pastures and boasting a delightful traditional fishing village, Menemsha. Views of rolling hills with stone-fenced pastures, flocks of sheep, and ocean backdrops are common, and while in Menemsha you can witness lobster boats unloading their catch as they have done for centuries. The area has some excellent seafood restaurants, and some of the best sunsets in the world.