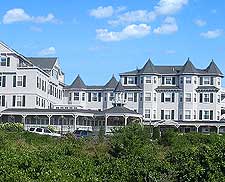 The world-famous summer resort island of Martha's Vineyard is set just to the south of Cape Cod, off the Atlantic seacoast, and includes Chappaquiddick Island in its designated area. Its 15,000 permanent residents are crowded out each summer by the arrival of an estimated 60,000 visitors.

By contrast, its original settlers, the Wampanoag Indians, numbered only 313 in 1764, when records were first kept during Martha's Vineyard's early colonial history.

The first Western explorer to land on Martha's Vineyard was English mariner Bartholomew Gosnold, who arrived in 1602 and named the island before he sailed on. Gosnold unwittingly created the oldest-surviving English place in the United States. It's most likely named after a daughter who died in infancy. The first colonial resident in early Martha's Vineyard history was Thomas Mayhew, a native of Watertown, Massachusetts, who bought the land from English settlers on the mainland.


Mayhew established friendly relations with the local tribe and honored their land rights, with his son converting several of the natives to Christianity. The relationship bore fruit during the First Indian War, as the Wampanoag refused to join with other Indian nations against the colonialists. However, Mayhew's lands were confiscated by the English Crown in 1665, and presented as part of a gift to the Duke of York, although Mayhew and his family were allowed to stay on. The family continued its work with Indian literacy, helped by teacher Peter Folger, Benjamin Franklin's grandfather. 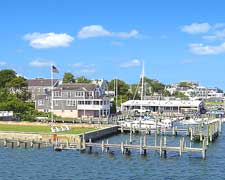 The conflicts of the War of Independence (1775 to 1783) and the War of 1812 largely passed Martha's Vineyard by, with the descendants of Thomas Mayhew continuing their work with the local Indians and establishing more schools. The first Native American graduates from Harvard University were from the island, educated in Mayhew's schools, and one Indian leader gave an address in Latin to the New England Corporation. Hebrew and Ancient Greek were also on the curriculum.

With its neighboring island, Nantucket, Martha's Vineyard finally came into prominence as a destination for ships involved in the whaling industry. The boom continued until the discovery of oil in Pennsylvania provided a cheaper source of fuel for lamps, causing the collapse of whaling in the region by 1870. The Old Colony Railroad arrived on the mainland two years later, with summer residences around the island gaining popularity as a result of easier access.

In spite of a struggle to survive during the Great Depression, Martha's Vineyard's reputation as a fashionable resort continued to grow, as did the number of wealthy summer visitors, including Jackie Kennedy, who maintained an estate on the island until her death. During this time in the history of Martha's Vineyard, Wampanoag natives were still resident on the island, with a number remaining today. 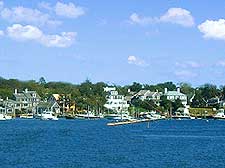 20th Century to the Present Day

Throughout the 20th century, Martha's Vineyard continued as a summer destination for the wealthy and famous, although notoriety struck in 1969 when Senator Edward Kennedy and Mary Jo Kopechne were involved in an accident, in which their vehicle came off a Chappaquiddick Island bridge, drowning Mary in the process.

Fame of a more acceptable nature arrived in 1974, when Martha's Vineyard's pretty scenery was immortalized in Steven Spielberg's highly successful movie, Jaws. Three islanders were given important roles in the film and numerous others were involved as extras. Jaws 2 and Jaws the Revenge were subsequently filmed here as well. Tragedy struck again in 1999, when John F. Kennedy Jr., his wife and her sister were killed when their small plane crashed just off the island's coast.