An unusual lakeside city with many shimming skyscrapers lining its beachfront, Chicago's coast is edged by a series of high-rise landmarks from the 20th-century.

Formerly known as the Sears Tower and located close to the South Branch of the Chicago River, the Willis Tower is especially eye-catching. When it was built in 1973 it remained the world's tallest building until 1996, when the Petronas Towers were opened in Malaysia.

The important Marquette Building has significantly influenced the design of many important American buildings over the years and is situated in the Loop district. Other landmarks of note in Chicago include the Michigan Avenue Bridge, the Navy Pier and the imposing Fisher Building, which was built in the late 1920s and is today amongst the city's oldest skyscrapers. For something a little different, grab your camera and head to the West Washington Boulevard, where the Picasso Statue has become something of a famous local sight, as has the Buckingham Fountain at Grant Park. 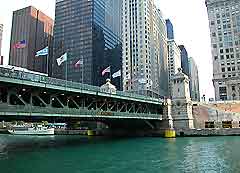 Address: 400 North Michigan Avenue, Chicago, 60611, Illinois, USA
Tel: +1 312 744 9050
Based within the Michigan-Wacker Historic District, the Michigan Avenue Bridge is also named the DuSable Bridge and was listed as an official Chicago Landmark in 1991, being located close to the Wrigley Building.

Construction started in 1918, with this crossing being opened to vehicles in 1920, and finally completed with all of its ornamentation in 1928, including various plaques and sculptures. The bridge is crossed by North Michigan Avenue, measures just under 400 feet / 122 meters, and features two levels for cars and pedestrians, with daily traffic on both levels generally exceeding 50,000 vehicles. 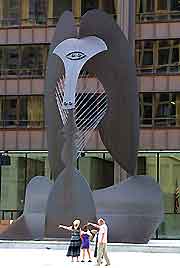 Address: 50 West Washington Boulevard, Richard J. Daley Plaza Civic Center, Chicago, 60602, Illinois, USA
Tel: +1 31 2443 5500
Created in 1967, the city's famous Picasso Statue quickly became a much-loved local sight. Situated in the Civic Center Plaza, this enormous statue was created from a model made by Picasso and is over 50 feet / 15 meters tall. The contemporary and stylish statue is simply referred to as 'The Picasso' by locals.

Address: 600 West Madison Street, Chicago, 60661, Illinois, USA
Tel: +1 312 744 7487
This large and imposing sculpture has become quite a landmark in Chicago and is situated in the Market District. Resembling an enormous baseball bat, the unusual structure is almost 30 meters / 100 feet high and is built from a combination of steel and aluminum, which has been painted with enamel. Constructed in 1977 by Swedish-American sculptor Claes Oldenburg, the Batcolumn is located on the Harold Washington Social Security Administration Building Plaza. 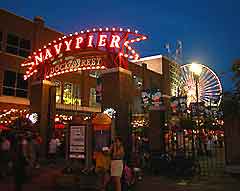 Address: 230 North Michigan Avenue, Chicago, 60601, Illinois, USA
The city's stunning Carbide and Carbon Building was created in 1929 and is clad in deep green and golden tiles. This structure was built to resemble a large champagne bottle and is situated in the Loop area of the city. The building now functions as the luxury Hard Rock Hotel and measures in at just over 150 metres / 495 feet tall, boasting some 37 storeys. 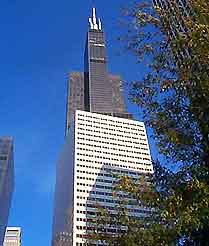 Address: 233 South Wacker Drive, Chicago, 60606, Illinois, USA
Tel: +1 312 875 9696
With 110 storeys and measuring over 1,450 feet / 442 meters high, this enormous skyscraper is still one of the tallest buildings in the world and certainly one of Chicago's most important and recognizable landmarks. A major attraction is the Willis Tower's Skydeck, which provides stunning panoramic views of the cityscape and beyond. Other highlights include a Skydeck Tour and a detailed exhibition with information about the tower's interesting history.
Open hours: daily, May to September - 10:00 to 22:00, October to April - 10:00 to 20:00
Admission: charge, discounts available for children aged between 3 to 12 years old and seniors, children three years old and under are free

Address: 5900 South Cottage Grove Avenue, Washington Park, Chicago, 60615, Illinois, USA
Tel: +1 312 747 6823
This vast stone fountain was finally finished in 1922, after almost 15 years of construction work. Marking 100 years of peace between England and America, the Fountain of Time features a reflecting pool, detailed sculptures and huge jets of water, and has become a familiar sight. The fountain is over 100 feet / 30 meters in length and is situated in the Hyde Park area of the city. 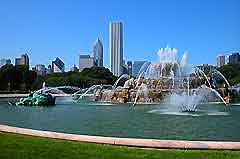 Buckingham Fountain stands in the heart of Grant Park and came into being in 1927, serving as an artistic representation of Lake Michigan and its surrounding states. Features include a number of seahorses, which represent the states of Indiana, Illinois, Michigan and Wisconsin. Set to music, the fountain shows tend to fall on the hour and last roughly 20 minutes, when the central jet rises to around 150 feet / 45 meters. The last show commences at 22:00 and this is a good time to appreciate the illuminations. Of note, the fountain does not operate in winter and starts up again in April.
Open hours: mid-April to October

Address: 1 South State Street, 5th Floor, Chicago, 60603, Illinois, USA
Tel: +1 312 641 7000
Sited close to the Millennium Park and the slender Legacy Tower, Carson Pirie Scott is steeped in history and was once the most important department store in Chicago. This glamorous building features detailed architecture and decorative ironwork, and sells reasonably priced goods, such as clothing, house accessories, cosmetics and also some excellent city souvenirs. Carson Pirie Scott is situated on the corner of Madison Street and State Street, within the Loop district.
Open hours: Monday to Saturday - 09:45 to 19:00, Sunday 12:00 to 17:00

Chicago Rising from the Lake

Address: 400 North Columbus Drive, Chicago, 60611, Illinois, USA
The impressive and imposing Chicago Rising from the Lake sculpture is worthy of a photograph or two. Created in 1954, this sculpture weighs over three tons and was originally situated in a car park. The sculpture can now be found above the city's riverwalk, close to the north side of the river, where it depicts a woman flanked by a bull and an eagle.

Address: 2750 North Lakeview Avenue, Chicago, 60614, Illinois, USA
Tel: +1 773 929 2100
The Elks National Veterans Memorial, located in the Lakeview area of the city, is a majestic Beaux Arts-style building that was completed in 1926. Featuring a sizeable dome, numerous intricate sculptures, large meeting rooms and stylish furniture, there is also a museum with exhibitions of medals. The monument stands next to the far northerly tip of Lincoln Park and originally paid tribute to those who had served in the First World War, but now also honors those from the Second World War, as well as the subsequent Korean and Vietnam wars.
Open hours: daily
Admission: free

Address: 343 South Dearborn Street, Chicago, 60604, Illinois, USA
Tel: +1 312 922 3432
The imposing Fisher Building is typically Art Deco in its appearance. Measuring some 420 feet / 128 meters high and boasting 30 floors, this tall building was designed by Daniel Burnham and is clad in terracotta. The Fisher Building was designated as a National Historic Landmark in 1989 and was originally inspired by early European Gothic cathedrals. Guided tours of the interior are available.

Address: 2200 North Stockton Drive, Chicago, 60614, Illinois, USA
Tel: +1 312 744 7487
This monument is one of the oldest presidential statues in the city and was created in the late 19th century by sculptor Augustus St. Gaudens. The statue shows Abraham Lincoln as a young man, before he became the president of America. When the statue was first unveiled it received worldwide acclaim and this epic bronze is officially titled 'Abraham Lincoln: The Man'.

Address: 140 South Dearborn Street, Chicago, 60603, Illinois, USA
Tel: +1 312 422 5500
The Marquette Building was built in the early 1890s and designated as one of Chicago's landmarks in 1975, being an early example of a steel-framed skyscraper. With an underlying steel framework structure and terra-cotta exterior (now blackened), this structure was quite stunning when it first opened. The building is named after for Jacques Marquette, a French Jesuit missionary and explorer who lived in the area from 1674 to 1675. Highlights include a spacious, light octagonal lobby with mosaic panels made by Tiffany's, as well as numerous bronze busts of early explorers.

Address: 435 North Michigan Avenue, Chicago, 60611, Illinois, USA
Tel: +1 312 222 3994
Built between 1922 and 1925, and now one of Chicago's most loved skyscrapers, the neo-Gothic Tribune Tower was originally created when the city's Tribune newspaper held a competition to design a tower. With a prize of USD 50,000, the competition attracted almost 300 entrants and was awarded to the architectural firm of Hood and Howell. This tall tower measures some 462 feet / 141 meters in height. With many famous stones embedded on the lower walls, including a moon rock and fragments of rock from the Alamo, the Colosseum and the Chinese Wall, the Tribune Tower ranks amongst the city's most beautiful man-made monuments of the 1920s.

Address: 407 South Dearborn Street, Chicago, 60601, Illinois, USA
Situated in the Loop district, the Old Colony Building is an especially splendid historic skyscraper, dating back to 1894. This building contains a number of interesting features, including round corner bays, which were a common feature of many early skyscrapers, as well as a dark facade with intricate architecture.