Two major airports serve northeastern Illinois - Chicago Midway (MDW) and O'Hare Airport (ORD). The Chicago Midway International Airport resides on the southwesterly outskirts of the city, where it is next to the Chrysler Village neighbourhood.

Annual passenger figures here are now close to 20 million, with annual flights topping 250,000. Of note, all of the international arrivals are handled within Concourse A.

Midway serves as a major hub for Southwest Airlines, which connects more than 50 individual destinations around North America. Other significant airlines residing here include AirTran Airways, Delta and Frontier Airlines. 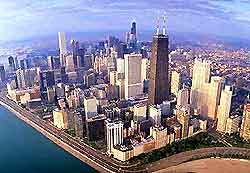 Downtown Chicago is easy to reach by several major highways close to Midway Airport, such as the Interstate I-55 (Stevenson Expressway), which leads to the central Interstate I-90 / I-94 (Dan Ryan Expressway). The trip between Midway and the city can take as little as 25 minutes, but during the morning and evening rush hours, this journey may take over 40 minutes.

The Bus and Shuttle Center at Midway Airport is to be found directly outside of the main terminal building, with shuttle buses operating 24 hours a day. Continental Airport Express shuttles leave Chicago Midway every 15 minutes, running between the hours of 06:00 and 23:30. This service also offers shuttle bus connections to the suburban districts of the north. Of note, the pickup point is in front of the main terminal building. Pace Buses pickup at the Transit Authority Midway Station and tend to serve both southerly and southwesterly destinations.

For transfers to and from the Midway and O'Hare International Airports, the Omega Airport Shuttle service provides an efficient and inexpensive service, from 07:00 to 22:00 each day.

Midway Airport (MDW) is connected to the downtown district by the Chicago Transit Authority (CTA) Orange Line station, situated close by. The railway station is clearly sign posted and the journey into the city center makes several stops along the way, lasting approximately 30 minutes in total. Of note, Chicago Transit Authority (CTA) cards offer unlimited travel for periods of three and seven days, and so can prove cost-effective if you are planning to use trains heavily during your stay.