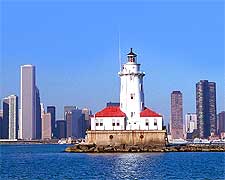 The recorded story of Chicago's beginnings displays its pivotal role in the history of the United States, its location as a hub for the region's emerging inland transportation network and its rapid development as a commercial center fuelled by land and property speculation.

Prior to the arrival of fur traders, French explorers and missionaries in the late 17th century, the land was home to a succession of Native American Indian tribes.

Ceded to the USA by Native American chiefs in 1795 as the site of Fort Dearborn, the early settlement of Chicago was destroyed by British forces during the American War of Independence (1775 to 1783), but returned to the US through a second Indian treaty in 1816. The fledgling city was finally founded in 1830, with its city charter granted in 1837. It immediately cashed in on the transport and sale of produce from the rich farmlands on its periphery. 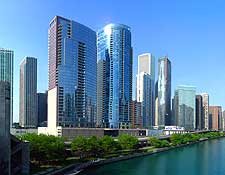 Chicago's crucial setting, controlling access to the Mississippi River basin from the Great Lakes region, sparked its rapid development as the vast country's rail hub, encouraging manufacturers, banks and other financial and commercial enterprises to relocate. A major fire in 1871 decimated the Central Business District, but rebuilding was fast and effective. By the 1890s, the city had also become a center for culture and the arts. 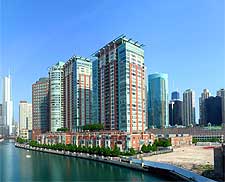 Chicago fast became the nation's warehousing and logistics heart, served by over 30 major rail routes. The ongoing history of Chicago rested on its fame as a transportation hub for lumber, while huge herds of cattle and pigs were arriving for slaughter, as well as wheat from the Illinois hinterlands.

A further boost was provided by the construction of the Illinois and Michigan Canal, giving shipping access through to the Gulf of Mexico from the Mississippi River and the Great Lakes. As early as 1893 it presented the world's most successful exposition, with the Chicago World's Fair attracting over 27 million visitors. By 1900, the city was home to 1.7 million people, including immigrants from Europe. 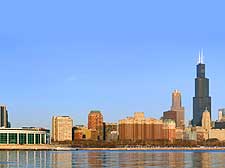 By the early 20th century, famous name catalogue-shopping retailers such as Sears and Montgomery were firmly established in the city, using its transportation options to reach out to customers in remote locations, as well as major towns and cities. A seminal moment in the history of Chicago occurred in the 1850s, when the entire city was ambitiously jacked up by five feet in order to minimize the regular flooding that was threatening trade.

During the first half of the 20th century, the city became a center for the advertising industry and North America's biggest rail hub, with its commercial activities proving to be a strong influence on America's booming economy. The advent of prohibition in the 1920s resulted in mafia-controlled organized crime, which continued mostly unchecked through its later connections with the labor unions in the city. Soon after, the Great Depression left its mark, stopping new construction for some ten years. 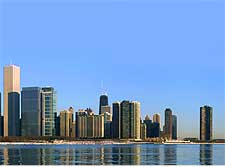 In spite of the Great Depression, in 1933 Chicago celebrated its centennial with a second World's Fair, this time attracting over 40 million visitors and symbolizing hope for the city and country in the midst of general despair. By then, the metropolis was home to unskilled workers from all over southern and Eastern Europe, drawn by the promise of a new life, along with African American incomers from the south and former agricultural workers from rural areas. Ethnic neighborhoods mushroomed, with Asian and Puerto Rican migrants adding to the multicultural mix by the 1960s. 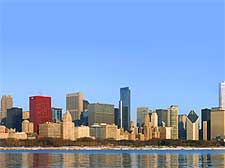 In the second half of the 20th century, major job losses in both the rail and steel industries took place. Also at this time, many comparatively wealthy inner-city residents left the downtown districts for new upscale suburbs with better facilities and schools, away from the recently impoverished working-class neighborhoods. Street violence was common in the 1960s due to the relocation of ethnic groups to new-build communities, as well as discriminative police practices and the Civil Rights Movement. Protests took place against the Vietnam War, with Chicago's police force reacting violently against unarmed demonstrators.

Chicago's modern history has seen the inner core of the city revitalized and its cultural diversity increased with new arrivals from Asia and Mexico.

The greening of the city has included improved air quality, a rush for rooftop gardens on skyscrapers and the new Millennium Park, with Moody's Investors Service rating Chicago as having the most balanced economy in the US.