Just north of central California, the state's western coast is where much of the appeal lies for tourists, away from Los Angeles and San Diego in the south. Monterey may just be a small city, but it is the perfect base for excursions.

Carmel by the Sea is especially close, while roughly an hour and a half away is San Jose to the north. Further north is San Francisco, which is still quite reachable (via the CA-1 / Cabrillo Highway and US-101) and is ideal for a weekend break or longer.

Located on the corner of the Camino El Estero and East Franklin Street, the Monterey County Visitors Center is a good place to pick up maps, being found right next to El Estero Park and close to the El Estero Presbyterian Church.

Take a stroll to the north and you will soon reach the Monterey Bay Coastal Trail, the Municipal Beach and the Municipal Wharf 2, where a cluster of seaside eateries are based. 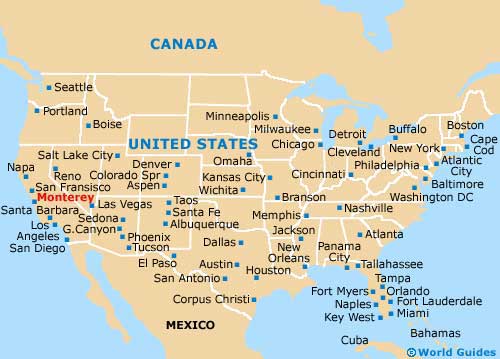