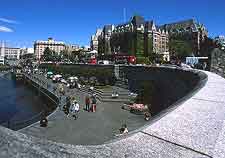 Lying on Vancouver Island's far southerly tip, where it serves as British Columbia's capital city and a leading tourism hotspot, Victoria is visited by almost four million tourists every single year, giving a clear indication of its appeal and status. Originally named as Fort Victoria, to honour the much-loved monarch of the time, Queen Victoria, the city is surrounded on three sides by water, and contains a very busy harbour, which is regularly frequented by giant cruise liners.

The city enjoys one of Canada's mildest and most pleasant climates, with plenty of grand buildings, parklands, history and ambiance to go round, and in recent years has appeared within the top ten global cities worth visiting, as awarded by the leading travel magazine, Condé Naste Traveller. Tourism has become a mainstay for Victoria and some 30 percent of locals now work within the tourist and service industry, with the main Tourist Information outlet being located on Wharf Street, next to the Inner Harbour waterfront. 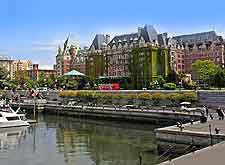 Each year, tourists come to Victoria for many reasons, with the city's whale watching being almost legendary. Whale watching cruises take passengers close to species such as Orcas (Killer Whales), seasonal Humpbacks and Minkes, amongst others. Alternatively, leisurely cruises around the attractive harbourfront are also popular, along with wine tasting at the various wineries around the Saanich Peninsula, and sunbathing at the neighbouring beaches, on the western shore. Families will enjoy spending time at the Victoria Bug Zoo, or onboard the moored exploratory vessel that is better known as the Pacific Undersea Gardens. More information about Victoria Tourist Attractions. 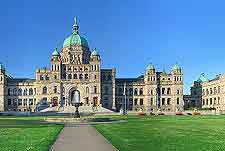 Very much a symbol of Victoria and widely associated with the city, the Fairmont Empress Hotel enjoys a very impressive waterfront setting and dates back to the early part of the 1900s. Other important structures of note in Victoria include the Parliament Buildings, the Craigdarroch Castle, and also the Government House, where the landscaped gardens are nothing short of spectacular. To soak up the local atmosphere in spades, head to the Fisherman's Wharf, next to Scenic Marine Drive, and enjoy a picnic with a view. More information about Victoria Landmarks and Monuments. 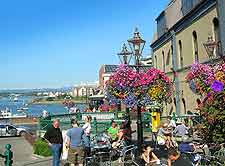 Victoria is a large city and contains a good selection of museums to match its grandeur and tourism scene. With historical information about the city's police force, the Victoria Police Department Station Museum is worth consideration, although most tourists prefer visiting the Royal London Wax Museum, the Royal British Columbia Museum, or the Maritime Museum of British Columbia. For art appreciation, the Art Gallery of Greater Victoria truly stands out from the crowd and is rated highly throughout Canada. More information about Victoria Museums and Victoria Art Galleries. 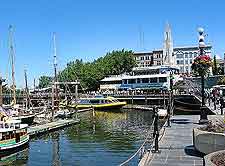 Tourists will find many places of interest within driving distance of Victoria. Popular excursions include day trips to Duncan and the Cowichan Valley, to the Carmanah Walbran Provincial Park, or to the city of Nanaimo, which lies directly to the north. Particularly close to Victoria is the charming town of Sidney, which resides on the north side of the Saanich Peninsula, where it has become known for its beautiful waterfront and scuba diving opportunities. Mainland Canada lies across the Strait of Georgia, with the bustling Tsawwassen Harbour in Vancouver being linked by regular ferries, while further afield, the winter skiing at Whistler is the very best that North America has to offer. More information about Victoria Attractions Nearby. 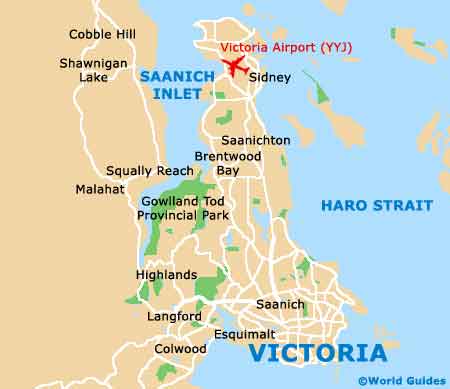