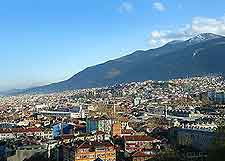 There is a good choice of lodging to be found within the Turkish city of Bursa, reflecting its ever-increasing popularity. Many of the best hotels in the Bursa area are just a matter of minutes from the Sea of Marmara and its inviting beaches, with a good choice of accommodation being situated within the outlying suburbs of Gemlik and Mudanya.

The centrally located Ulubatlu Hasan Bulvari lies within the very heart of Bursa and is where you will find some of the city's leading accommodation options, such as the Allstar Central Hotel, close to the Yani Yalova Bulvari and the Dr. Sadik Ahmet Caddesi. 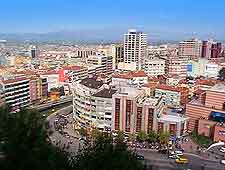 One of the city's most highly recommended choices is the ever-affordable Hotel Gonluferah, which resides on the westerly 1 Murat Caddesi and boasts some very special valley views. More central is Bursa's renovated Ottoman-style Hotel Gunes on the Inebey Caddesi, as well as the Hotel Efehan on the Gumusceken Caddesi, and the Safran Otel on the Arka Sokak.

Those who prefer a familiar accommodation brand will likely consider the Holiday Inn Bursa on the Uludag Universitesi Gorukle Tipfakultesi Karsisi, which may be some 15 km / 9 miles from the city centre, but is well connected by public transport and conveniently close to the Uludag Mountain.

The Fevzi Cakmak Osmangazi is another much favoured street in Bursa city centre and where you will find the acclaimed Kervansaray Hotel. Further lodging and accommodation options are available around the Republic Square and to the north-west, along the Cemal Nadir Caddesi and within the peaceful spa suburb of Cekirge.