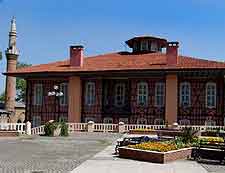 The varied tourist attractions of Bursa range from relaxing, steamy Turkish baths (Hamams) and scenic mountain cable car rides, to hiking trails and seasonal skiing on Mount Uludag. Also very much of note are both the Tombs of Osman and Orhan and the Muradiye Complex (Muradiye Külliye).

Close to the Altiparmak area, the Culture Park is without question one of the most noteworthy of all the tourist attractions in Bursa and is to be found on the northern side of the Muradiye complex. Each summer, the Kultur Park and its open-air theatre plays host to the Bursa festival, which always attracts sizable crowds. 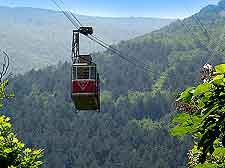 Address: Mount Uludag, Bursa, Turkey, TR
For something quite different to the historical attractions of Bursa, the cable car rides (telerifik) up Mount Uludag really are not to be missed, whatever the time of the year. In the height of the summer season, the mountain's cable cars transport tourists away from the heat of the city and into the cooler mountain air, where countless scenic picnic spots await. Those riding on the cable cars of Mount Uludag can stop off part way for horse riding, or journey to the very top, to the gift shops, eateries and panoramic views. The cable car ride to the summit of Mount Uludag lasts around 30 minutes, during which time you can expect to enjoy some very impressive Turkish scenery, so do bring your camera along for the ride.
Open hours: daily, April to September - 08:00 to 22:00; October to March - 10:00 to 17:00; weather dependent
Admission: charge

Address: Cekirge, Bursa, Turkey, TR
Cekirge is an especially appealing area of Bursa and known for its historic character and innumerable period attractions. This westerly suburb is famous for its spas and mineral-rich waters, which naturally spring from around Mount Uludag. Fresh mineral water from Cekirge is considered so precious that it is actually piped to different parts of the city. Sightseers should look out for the Hudavendigar Cami (Royal Mosque), which is one of the most impressive structures in this part of the city.
Open hours: daily - 24 hours
Admission: free 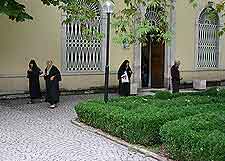 Tombs of Osman and Orhan

Address: Hisar District, Bursa, Turkey, TR
For many a tourist, the elaborately decorated Tombs of Osman and Orhan one of the reasons to pay a visit to Bursa, offering a real insight into the past. Overlooking the Camal Nadir Caddesi, the Tombs of Osman and Orhan are extremely historic and were once fully enclosed by imposing stone ramparts, sections of which still remain. To reach these important attractions, take a stroll along the Orhan Gazi Caddesi and to the Hias (fortress), where a small and somewhat elevated park is home to the tombs of the actual founders of the Ottoman Empire. Although the original structures suffered considerable damaged during the mid-19th century earthquake, the tombs were soon rebuilt, in an authentic Ottoman / Baroque style. Worth noting, before you are actually permitted to enter the precious tombs, you will first be asked to remove your shoes.
Open hours: daily - dawn to dusk
Admission: free, donations accepted

Address: Bursa, Turkey, TR
The locals in Bursa refer to the city's ever-popular Turkish baths as the 'hamams' and these really do offer the ultimate 'Turkey experience'. Similar to a sauna, hamams serve many purposes other than simply cleansing and have become something of a social affair, with bathers first relaxing in a 'warm room', before moving to the 'hot room' and then enjoying a massage and body wash, and finally cooling down in the 'cool room'. The city's most notable hamams features bold architecture and include the Turkish baths of Karamustafa Pasa and the historic Eski Kaplica.
Open hours: daily
Admission: charge 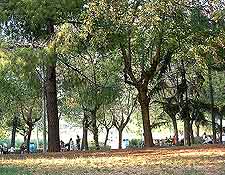 Address: Near Cekirge Square / Altiparmak, Bursa, Turkey, TR
The expansive Kultur Park was completely re-landscaped as recently as 2006 and is really now beginning to mature, with attractions including tea gardens, play areas for children and many secluded benches, which are often strategically positioned next to the pond and close to the cafes. Rowing boats are available for hire on the pond, while the Bursa Archaeology Museum is always popular and is filled with local treasures.
Open hours: daily - dawn to dusk
Admission: free 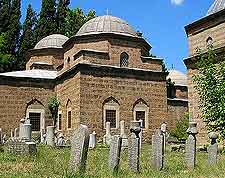 Address: Muradiye, Cekirge, Bursa, Turkey, TR
Standing alongside a shady public park, the Muradiye Complex really does offer a very peaceful spot within the busy city of Bursa. This magnificent mosque was built during the early part of the 15th century and features many beautifully painted walls and tiled attractions. Just behind the mosque itself are a total of 12 tombs, which include the actual tombs of none other than the Sultan Murat II, the sovereign of the entire Ottoman Empire between 1421 and 1451. The Muradiye Mosque is an important part of this complex and is known to have been completed almost 600 years ago.
Open hours: Tuesday to Sunday - 08:30 to 12:00, 13:00 to 17:00
Admission: free