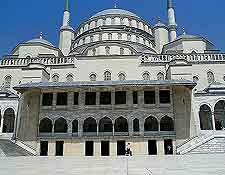 Mosques, towers and parks are popular landmarks in Ankara. The Old Town (Ulus) has the pick of the mosques and is the most atmospheric place to have a wander, particularly within the Citadel's walls.

For overall views over Ankara, the Atakule Tower is unbeatable and comes complete with a very noteworthy restaurant. Also of interest is the Column of Julian (Queen of Sheba Monument) and the Yeni Mosque (Cenab Ahmet Pasa Camii). 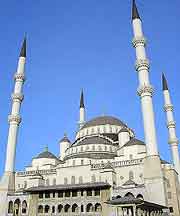 Address: Olgunlar Sokagi, Kocatepe, Ankara, Turkey, TR
Ankara's newest and largest mosque has a commanding position on Kocatepe hill and is a popular and grand city landmark. The mosque was built in the Ottoman style in 1987 and features stained-glass windows, marble and gold leaf décor, and a massive crystal chandelier. The model of the Mescid-I Nebevi mosque, Medina, can be seen inside, while a shopping store is actually sited within the basement.
Open hours: daily - dawn to dusk
Admission: free

Address: Off Kadife Sok, Ulus, Ankara, Turkey, TR
The Lion's Den Mosque is a must-see Ankara landmark and was named after the lion statues in its walls. This mosque is one of the best examples of Selçuk architecture in the whole city, featuring a polychrome ceramic mihrab and striking wooden support columns with marble Corinthian capitals atop.
Open hours: daily - dawn to dusk
Admission: free 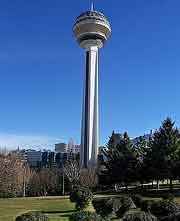 Address: Cankaya, Ankara, Turkey, TR
Ankara's landmark tower lies in Cankaya, to the south of town, and completely dominates the skyline. The famous Atakule Tower naturally provides outstanding panoramic views of the city, and entry is completely free if you make a reservation to the revolving restaurant here. The super-fast glass front lift is sure to get your adrenaline going, and there is also a cinema onsite.
Open hours: daily
Admission: free (with restaurant reservation)

Address: Ulus, Ankara, Turkey, TR
The Yeni Mosque is one of Ankara's more recent sites of worship, built as it was in the 16th century. It was the brainchild of Sinan (Süleyman the Magnificent, the royal architect) and is the biggest Ottoman mosque in the city. The mosque was primarily constructed using red porphyry (crystal-imbedded rock) and the minbar and mihrab are made of white marble.
Open hours: daily - dawn to dusk
Admission: free

Address: Ulus, Ankara, Turkey, TR
This impressive column in old Ankara, known locally as Belkis Minaresi or sometimes as the Queen of Sheba Monument, was built in 362 AD and commemorates Emperor Julian's visit. Although there are many other monuments worth seeing in the city, architectural types will appreciate the 6th-century Corinthian capital and its stork's nest.
Open hours: daily
Admission: free