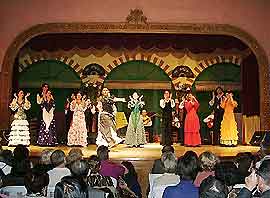 The biggest festivals in Seville tend to be of a religious nature, with the Easter celebrations during Holy Week (Semana Santa) being especially lively.

Further events of note in the Andalusian capital include the Seville Fair (Feria de Sevilla), which is also often referred to as the April Fair (Feria de Abril) and begins roughly a fortnight after Semana Santa. The fair lasts just under a week and commences with a midday procession of horses and carriages, followed by a gathering at the bullring. Marquee tents line the Guadalquivir River, while dancing, live music events, flamenco dresses and tapas are all soon the order of the day, along with various other things to do and enjoy.

Later in the year, look out for festivals such as those based around Corpus Christi time and the Dia de San Juan, both of which take place in June and reliably draw big crowds.

There are approximately fourteen accepted public holidays in Spain, which can be acknowledged on either a local or national basis. Listed below are those dates observed in Seville.

A variety of occasions are detailed for a taste of what Seville has to offer. However, the already busy social calendar of the city is continually being added to.