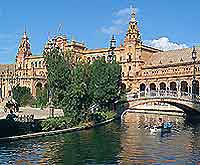 Whatever you are planning to do in Seville, it is highly advisable to join a guided bus tour or walking tour, to learn more about the many tourist attractions within this city. The simply huge Plaza de Espana is an especially famous building in Seville and for many epitomises the very best of traditional Moorish Revival architecture in Spain.

Families holidaying in Seville won't be disappointed and the Isla Mágica is one attraction not to be missed, boasting state-of-the-art roller coasters, live shows and a 4D cinema (Dimensión4), being built upon the grounds where the World's Fair / Universal Exposition of 1992 was staged. Tourists will also find much to savour at the Espacio Cultural Puerta Triana cultural theme park, where local Italian history is very much celebrated.

Walking tours in Seville provide an ideal way to see many of the attractions in Seville and gain a real insight into the history of Seville's major monuments.

City guided bus tours are available and these take in the sights in and around central Seville. English speaking guides are on board the bus and time is allowed for walking around at some of the stops, to take in the beautiful surroundings. There are also hop on / hop off guided bus tours and these provide an easy way of sightseeing. With daily hop on / off tickets, they are also a very useful way to travel around the city, since you can leave the bus to explore and get back on when you are ready.

Address: Puerta de la Barqueta, Isla de la Cartuja, Seville, 41092, Spain
Tel: +34 90 216 1716
This exciting theme park includes thrilling roller coasters, other rides and theatre shows. The Isla Mágica recreates 15th-century Spain and is an especially popular family orientated tourist attraction in this part of Spain, appealing to both children and adults. The park is situated in the Isla de la Cartuja area of Seville and the season begins in March each year. It is easy to reach by bus from Seville's city centre.
Open hours: daily - 11:00 to 23:00
Admission: charge, discounts for children and seniors 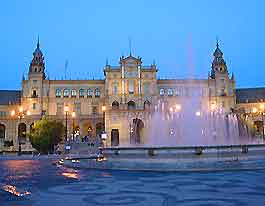 Address: Glorieta de Anibal González, Seville, 41013, Spain
Tel: +34 95 423 9909
The magnificent Plaza de Espana is situated in the city's Parque Maria Luisa and has become an important symbol of Seville. With tiled benches and stunning architecture, the plaza was built for the 1929 Exposition, where it was the centrepiece. Around the edge of the large semi-circle is a canal, where it is possible to hire a rowing boat. Buses connect the park with all parts of the city.

Address: Camino de los Descubrimientos, Seville, Spain
Tel: +34 95 446 0089
The Isla de la Cartuja in Seville, south of the old monastery, has become a cultural theme park, rich in museums and many other educational exhibits. One of the first attractions was the large and high-tech Omnimax cinema, which opened in 1995 and features films about the history of the earth and its many explorers.

The films are shown on an enormous, semicircular screen. Nearby is the Museum of Popular Science, the Pabellon de la Navegacion - with displays focusing on the sea, the Nao Victoria - a faithful replica of a 16th-century sailing ship, theatres, restaurants, bars and wonderful views of the Old Town area across the river.