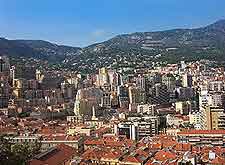 Monaco is a small principality and resides on the southern coastline of France, next to the Mediterranean sea and extremely close to the Italian border. In total, Monaco comprises six main areas, of which Monte Carlo is the most famous, being known the world over for its glamorous casinos and Grand Prix.

Apart from Monte Carlo, Monaco's others districts are Fontvieille, La Condamine, Larvotto, Monaco Ville and Moneghetti. Just a stone's throw from Monte Carlo and to the north, the charming French town of Beausoleil is just literally streets away.


Maps and Orientation of the Area

Monaco Ville is often referred to as the Old City, due to its historical streets and eye-catching buildings, such as the Prince's Palace, which presides over Monte Carlo from its elevated setting, atop a high outcrop of rock, south of the port. Also extremely popular is the Larvotto area, which lies directly north of Monte Carlo and is home to some rather spectacular stretches of sun-drenched sand, such as the Plages du Larvotto (Larvotto Beach).

For maps of Monaco and Monte Carlo, the Direction du Tourisme et des Congres de la Principauté de Monaco is the place to come, being located along the Boulevard de Moulins and near to the casino and public gardens. During the peak summer months, maps are also available at various the tourist kiosks that appear around the harbour.