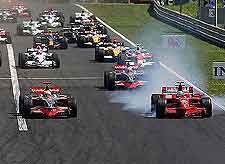 The Monaco Grand Prix has been drawing car enthusiasts to the principality since its inception and is the shining star of Monte Carlo's calendar of events and local festivals. This fast-moving event sees the city fill with supporters, who come to line the streets of Monte Carlo and watch as masterful drivers take on daring hairpin turns.

Vehicles of a different kind can be admired at the Monte Carlo Yacht Show in September, a popular event where some of the world's most expensive yachts gather at Port Hercules much to the delight of onlookers.


If you prefer more sedate entertainment rather than brash festivals, the city's opera season supplies visitors with a vast choice of quality performances, most of which are held at the flamboyant Monte Carlo Opera House. Later in the year, in April, guests are treated to ballet performances by Les Ballets de Monte Carlo at the Spring Arts Festival.