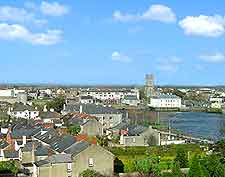 Limerick, a city forever to be known for a certain tongue-twisting form of Irish verse, is in fact a popular tourist destination on Ireland's west coast. This is a sizeable city with a typically charming centre, displaying a mix of old Ireland and the more contemporary country which has boomed in the Euro-era.

Sitting astride the River Shannon, Limerick is one of Ireland's largest cities. For those travelling between Galway and Killarney it serves as a brief lunch stop, but a few days spent here offers a nice respite from the more tourist centres of the island. Perhaps the best way to enjoy Limerick is by staying in one of the marvellous country estate homes in the area, where you get to really experience the rolling green hills of Ireland, sometimes seated on the edge of a pretty lake.

The proximity of Shannon Airport, Ireland's second largest, is an advantage for the city, since long haul trans-Atlantic flights routinely land here. Tourist information is available at the airport, with a further tourism outlet being located in the city, on Arthur's Quay. 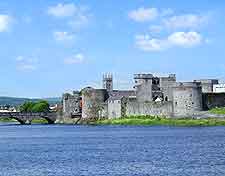 For tourists, it is the heritage of Limerick that serves as the big draw and many of the attractions are of a historical nature. Consider joining the walking tour to learn about the city and what it has to offer, and also how it became famous when it featured heavily in the award-winning 1996 memoirs entitled Angela's Ashes. Sightseers will likely enjoy experiencing the authentic period recreations at the Georgian House and Garden, while others may like to bet on the horses at the famous Limerick Racecourse, just a short distance away, in the adjacent town of Patrickswell. For recreation in pleasant surroundings, check out the People's Park and its seasonal gardens. Others simply come to the city to watch a Irish Rugby Football Union game or rock concert at the Thomond Park Stadium. More information about Limerick Tourist Attractions. 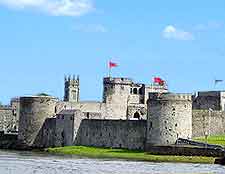 When it come to important Irish landmarks, Limerick certainly delivers and provides tourists with much choice. Not to be missed is King John's Castle, which stands on King's Island, next to the River Shannon, where it boasts Viking origins and a very interesting past. Right next door to the castle and the ancient toll gate is the 18th-century Bishop's Palace, another important building, known for its classical Palladian facade and for once being the residence of the city's Protestant Bishops. Today, the Bishop's Palace is home to the Limerick Civic Trust and welcomes visitors. There are also no less than two cathedrals in the city, as well as a prominent statue of famous Irish politician Daniel O'Connell, and an important stone where the Treaty of Limerick was signed in 1691. More information about Limerick Landmarks and Monuments. 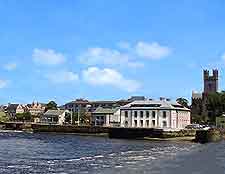 There are a number of good museums in the city, offering information relating to a mixture of different Irish-based subject matters. The Jim Kemmy Municipal Museum contains many historical exhibits and Bronze Age relics, as well as a gallery of city photographs and maps. At the nearby Foynes Flying Boat Museum you will find out how the world's first flight between North America and Europe used the town of Foynes as a place to land. Based in the city is the Hunt Museum and its impressive collection of art, and also the Limerick City Gallery of Art (LCGA), where Irish artists, both past and present, are extensively exhibited. More information about Limerick Museums and Art Galleries. 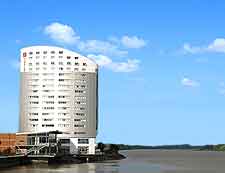 The proximity of the city to so many tempting County Limerick attractions makes this the ideal place to base yourself and plan some excursions. Especially nearby is the tiny village of Adare, where Desmond Castle and several historic friaries are located. Slightly further away is Glenosheen, another charming village just a short drive from Limerick and the Seefin Mountain. Day trips to Newcastlewest are especially popular and people frequently come to this sizable town to stroll or cycle along the famous Great Southern Trail. Other nearby attractions include Glin Castle and the seaside resort of Kilkee, as well as the vibrant cities of Cork, Galway and Killarney, where the expansive Killarney National Park is a particular tourist magnet. More information about Limerick Attractions Nearby. 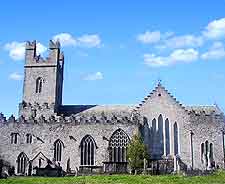