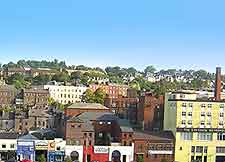 The city of Cork is the principal city of the locally nicknamed 'Rebel County'. This historic city lies on an island created by the division of the River Lee, to the west. The two channels meet again in the east, flowing around Lough Mahon and forming the extensive seaport of Cork Harbour.

Cork is a popular centre for tourism with its strong cultural scene involving theatre, music, dance, poetry and film. Its many fine architectural examples, ranging from medieval through Georgian to contemporary, include two cathedrals, the buildings in and around St. Patrick's Street and the city's symbol, the Shandon church tower. Shopping here is diverse and eclectic, and the city's pubs, clubs and restaurants are famed for their vitality and variety. 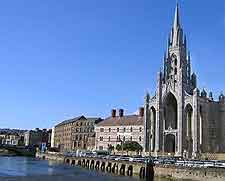 Being such a historic Irish city, Cork comes with more than enough tourist attractions to satisfy the desires of any ardent sightseer. The Cork City Gaol Heritage Centre is a good place to start and provides an insight into crime during the 19th century, while the English Market on the Grand Parade provides a great place to shop and is actually Ireland's largest indoor market. Period buildings are in good supply within the South Mall area and it is easy to imagine how this district was once the city's financial heart. Next door, the suburb town of Cobh comes with a huge natural harbour and a number of tempting sights to see, such as St. Colman's Cathedral, Haulbowline Island and Spike Island. More information about Cork Tourist Attractions. 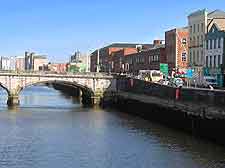 The skyline of Cork is punctuated by numerous church towers, with the spire of St. Finbarre's Cathedral presiding over the River Lee and dating back to the latter part of the 19th century. St. Mary's Cathedral is another important religious building in Cork and is around 200 years old, boasting Neo-Gothic Revivalist architecture and a series of impressive oak statues. Further important landmarks in the city include both the Michael Collins Monument and the National Monument, the latter of which commemorates past uprisings. Built in the early 17th century, the Elizabeth Fort is hard to miss and dominates much of the city with its star-shaped fortifications and imposing stone walls. More information about Cork Landmarks and Monuments. 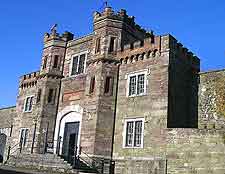 Being such a popular tourist-friendly city, Cork has plenty to offer in the way of museums and related cultural attractions. The Cork Public Museum is certainly one for history buffs and contains much information relating to past Lord Mayors, the Irish revolutionary leader Michael Collins, and further important locals. The Vision Centre is another interesting offering and features a detailed scale model of the city. Other city highlights include the Butter Museum on O'Connell Square, and nearby, the Cobh Museum and the Ballincollig Royal Gunpowder Mills. Several good galleries are to hand if you prefer that kind of thing, such as the Crawford Municipal Art Gallery on Emmet Place and the Lewis Glucksman Gallery at the University College Cork (UCC). More information about Cork Museums and Cork Art Galleries. 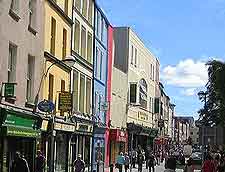 Those holidaying in Cork should certainly leave plenty of time to explore the county and the surrounding countryside. Close by is Blarney Castle, which is literally famous the world over for being the place where you get to kiss the 'Blarney Stone'. Especially close by and connected to the city via a bridge is Fort Island, home of the extremely popular Fota Wildlife Park - the perfect day out for families. Visitors may like to take a drive to explore some neighbouring Irish tourist destinations, such as Glengarriff - next to Bantry Bay, Gougane Barra - rated County Cork's number one beauty spot, and Mizen Head - a scenic rocky promontory. Also within reach of the city is the late-17th century Charles Fort, and the Midleton Distillery, where you can sample some real Irish whiskey. More information about Cork Attractions Nearby. 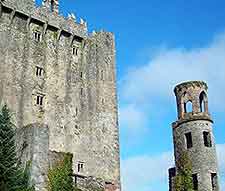 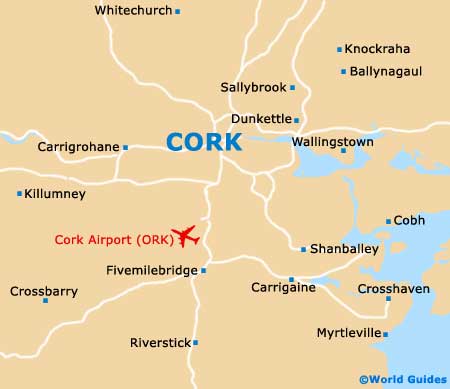