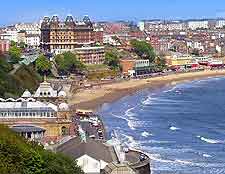 Regarded by many as being the very birthplace of the British summer holiday, Scarborough first rose to prominence in the 17th century, when it became famous for its spa water. Soon after, the gentry arrived in their droves to sample this spa water, take tea on the promenade, enjoy the sea air and then stroll along the beautiful beaches of Scarborough, and tourism in the town was born.

Things have certainly changed more than a little since these bygone days, and no longer will ladies require an antiquated Victorian bathing machine if they fancy a dip in the sea. In the past few decades a number of movies have even used Scarborough as a backdrop, such as 'Little Voice' (1998) starring Jane Horricks, and 'Miranda' (2002) with Christina Ricci and John Hurt.

Recently awarded 'Britain's Most Enterprising Town' and 'Europe's Most Creative and Inspiring', Scarborough is much more than just a simple seaside town. For up-to-date tourist information, pay a visit to the tourism bureau at the Brunswick Shopping Centre, or the Harbourside Tourist Information Centre on the South Bay seafront. 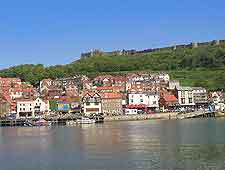 Scarborough is essentially first and foremost a family resort, and as such, caters well for children. On the very tourist friendly South Bay, the attractions come thick and fast, and include both the Fantasy Forest and the Luna Park Funfair, together with cliff railways (funicular cars), which connect the beachfront with the town above. Fronting the North Bay of Scarborough is the Japanese-themed Peasholm Park, and the ever-popular Sealife and Marine Sanctuary, which contains everything from sharks and turtles, to seahorses and miniature coral reefs. On a hot day, the water slides at the Atlantis Water Park are the perfect way to cool down here, or perhaps a ride onboard the coastal North Bay Miniature Railway. More information about Scarborough Tourist Attractions. 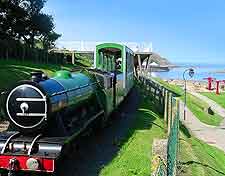 Standing high above the town and atop the headland that separates the North Bay from the South Bay, the imposing ruins of Scarborough Castle have certainly become the town's number one landmark, regularly being strongly associated with the town. Another important local sight is the Scarborough Spa Complex, which rather dominates the seafront and serves as a leading entertainment venue, housing the Grand Hall and Spa Theatre, as well as its open-air Suncourt plaza, which features distinctive black and white terrazzo tiles. Opened towards the end of 2005, the multi-million Opera House Casino is a major gambling attraction, while the considerably older St. Andrew's United Reformed Church is often referred to as the 'Cathedral of Yorkshire Congregationalism'. Fans of the Bronte-sister novelist, Anne Bronte, may like to visit her gravestone at St. Mary's Church. On the south-westerly outskirts, Ayton Castle is another notable structure. More information about Scarborough Landmarks and Monuments. 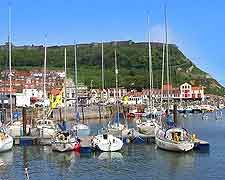 Although the beach attractions of Scarborough really do steal the show, those looking to indulge in an afternoon of culture will find several museums of interest. Close to the famed Grand Hotel and enjoying a cliff-top setting, the recently refurbished Rotunda William Smith Museum of Geology has become a national centre for geological information, with galleries named the 'Creative Coast' and the 'Dinosaur Coast'. For fine art, the established Scarborough Art Gallery on the Crescent is the place to come and promotes local Yorkshire artists where possible. Nearby, further museums are to be found in Filey, Kirkleatham, Lebberston, Redcar, Saltburn by the Sea, Whitby and also Staxton, where the Spital Farm Dickensian Craft Centre awaits. More information about Scarborough Museums. 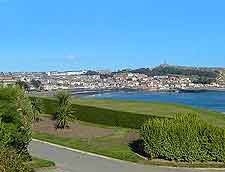 Yorkshire has many exceptional attractions, such as the Yorkshire Dales, Herriot Country and Bronte Country. Close to Scarborough, tourists looking to take a day trip or two often head next door to the North Yorkshire Moors, or to the neighbouring seaside destinations of Bridlington, Filey and Whitby. A particularly popular excursion, Whitby offers much more than just a sandy beachfront and is known for its Captain Cook heritage and connection to the original Dracula novel. Traditional market towns close to Scarborough include both Pickering and Helmsley, respectively home to Flamingo Land and a historic Norman Castle with walled gardens. Many visitors choose to take in the sights of nearby York, a city renowned for its Gothic minster, medieval city walls and Jorvik Viking Centre. Also nearby are the villages of Coxwald, Danby, Hotton le Hole and Robin Hood's Bay, the towns of Guisborough and Harrogate, and the cities of Kingston upon Hull, Leeds, Lincoln and Sunderland. More information about Scarborough Attractions Nearby. 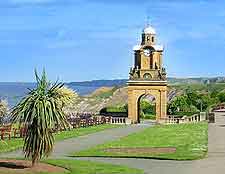