The Croatian city of Rijeka, on the northern coastline of the Gulf of Kvarner, is the country's largest port and commercial transportation hub, and the third-biggest city in Croatia, after both Zagreb and Split. Located in Rijeka Bay, the city's maritime and industrial tradition mushroomed after the end of WWII and is now, with commercial shipping, the city's main economic focus. However, Rijeka is not just factories, shipbuilding and oil refineries, it is also a thriving cultural and artistic centre close to some of the best possible sightseeing in the country.

Tourism, as well as agriculture and fishing, are boosts to the economy, with the city being the main crossroads for Adriatic holidays. Rijeka is home to an attractive old quarter, the site of the original town, and spectacular natural beauty provides a stunning backdrop to the cityscape. Business tourism is also important here, with a growing conference and exhibition sector, and the city is an important pilgrimage destination and a centre for Marianism.

The continued expansion of the city is bringing it closer to Opatija, located further along the bay and amongst famous of Croatia's tourist destinations. Tourism information can be found at major hotels and the city's tourist office.

Many people tend to pass through Rijeka, on their way to Dalmatia or to a neighbouring island. You may be in this area heading to one of the surrounding beaches, with some of the best residing on the islands of Cres, Krk, Losinj and Rab. Particularly popular and close by are the beaches of Icici, Klenovica, Lovran, Opatija and Volosko, offering a mixture of facilities, seafood eateries and water sports. Located on the Crikvenica Riviera, the Dramalj Beaches are especially suitable for families and swimming. More information about Rijeka Beaches.

If your schedule allows, do take time to stay in Rijeka for at least a day or two, taking a self-guided tour on the walking route named the 'Turisticka Magistrala', or strolling along the tree-lined Korzo promenade, enjoying the views of the harbourfront. After that, tourists in sightseeing mode should take in attractions such as the epic hilltop Trsat Castle (Gradina Trsat), which has presided over the city since Illyrian days. Another elevated sight is the Church of Our Lady of Trsat (Crkva Gospe Trsatske), standing just beneath the castle, where it has long been a major destination for pilgrims and is connected by the Petar Kruzic Stairway. Next to the intercity bus terminal and on the western side of central Rijeka, the Church of Our Lady of Lourdes (Crkva Gospe Lurdske) is an additional religious attraction of great note. More information about Rijeka Tourist Attractions.

One of the most iconic and photographed landmarks still remaining after serious earthquake damage in the middle of the 18th century, the City Clock Tower (Gradski Toranj) was built as an ornate gateway between the city and its seafront. A handful of other buildings from this period remain, fully restored, although much of the city was rebuilt and remodelled at this time, adopting a distinctive style from the Austrian Habsburg period. The St. Vitus Cathedral (Katedrala Svetog Vida) is one of the city's oldest landmarks still standing, being built by Jesuits in 1638 to honour the patron saint of the city,with giant marble pillars supporting its central dome. Both the Governor's Palace (Guvernerova Palaca) and the Municipal Palace (Palaca Municipija) add a regal flavour, while the ancient Town Wall and Old Gate offer an indication of the former grandeur of the city's past fortifications. More information about Rijeka Landmarks and Monuments.

Rijeka is a city with much history and this part of Croatia is known for its Neolithic settlements and Roman heritage. In 1466, the city was shaped during its Austrian rule, becoming a prominent free port in the early part of the 18th century. To learn information about the Rijeka's interesting past, the Maritime and Historical Museum of Coastal Croatia (Pomorski i Povijesni Muzej Hrvatskog Primorja) is a good place to start. Families should be sure to pay a visit to the Natural History Museum (Prirodoslovni Muzej) and perhaps the City Museum (Muzej Grada Rijeke) as well. Those keen to see some Croatian art should allow enough time to check out the Museum of Modern and Contemporary Art (Muzej Moderne i Suvremene Umjetnosti), where pieces span the decades from the late 1940s onwards. More information about Rijeka Museums.

Day trip from Rijeka offers a taste of all aspects of Croatia, with modern towns, national parks and ancient archeological sites within reach of the city. Particularly close by is the Risnjak Narodni Park (Nacionalni Park Risnjak), the historic towns of Buzet and Novi Vinodolski, and the charming fishing village of Volosko. Boat trips to the islands of Rijeka Bay are recommended, as are excursions to the Plitvice Lakes National Park, roughly three hours away, and outings to the Istrian Peninsula.

Almost next-door, the seaside resort of Opatija was once regularly frequented by the rich and famous. Located just 14 km / 9 miles to the east of Rijeka, Opatija is well connected by coastal buses. This is a great spot for a swim and the resort comes with a good choice of upmarket hotels, shops and seafood restaurants, often overlooking the harbour. One must-see attraction in Opatija is the Croatian Museum of Tourism, which resides within the neo-classical Villa Angiolina and contains some impressive frescoes and floor mosaics. More information about Rijeka Attractions Nearby. 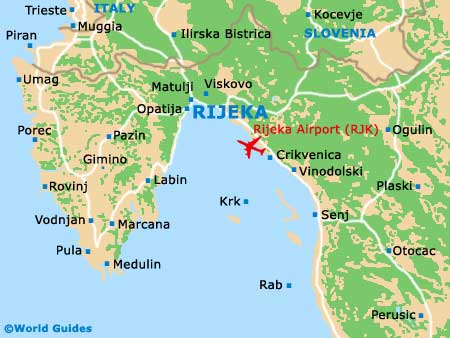