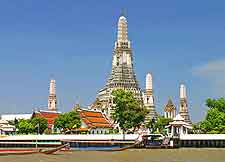 Many, many historic landmarks, palaces, monuments, shrines and temples (wats) are scattered all over Bangkok, adding a strong and unique character to this city. One of Bangkok's most famous landmarks is without doubt the Grand Palace, home to the legendary Temple of the Emerald Buddha (Wat Phra Kaew).

Many more truly captivating temples await the tourist in Bangkok, along with magnificent buildings showcasing Thailand's architecture at its best, both old and new. The main landmarks and temples are explained below. 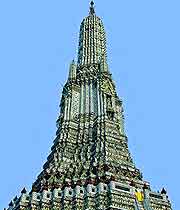 Address: 34 Arun Amarin Road, Kwang Wat Arun, Bangkok, 10600, Thailand, TH
A stunning temple named after India's famous God of Dawn, Aruna, the Wat Arun can be found in the Thonburi city on the winding Mae Nam Chao Phraya River. The present building was constructed on the site of the 17th-century Wat Jaeng, a royal temple and palace, and was the last home of the iconic Emerald Buddha before it was moved to the Wat Phra Kaew, located across the river. The 82-metre / 269-foot 'prang' tower was built during the first part of the 19th century by both King Rama II and also King Rama III.
Open hours: daily - 08:30 to 17:30
Admission: charge

Address: 195 Suriwong Road, Bangkok, 10500, Thailand, TH
Tel: +66 02 233 1731
Founded in 1869 and located in the very heart of Bangkok city centre, the Neilson Hays Library is currently housed within a particularly grand building, which dates back to 1922. With 20,000 different volumes, many by famous western authors, and now completely air-conditioned, the library's architecture is as impressive as its extensive contents, which also includes many local documents and a number of visiting exhibitions.
Open hours: Tuesday to Sunday - 09:30 to 16:00
Admission: free 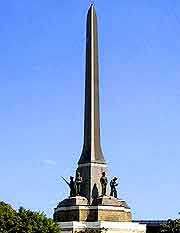 Address: Ratchawithi Road, Thung Phayathai, Bangkok, 10330, Thailand, TH
A prominent military monument located within the Ratchathewi district, the eye-catching Victory Monument lies on the north-eastern side of Bangkok and is the centrepiece of an enormous roundabout. Constructed in 1941, this much-loved local landmark consists of a tall obelisk surrounded at the base by a number of military statues, commemorating Thailand's victory in a war with Indo-China.
Open hours: daily - 24 hours
Admission: free

Address: Phra Athit Road, Bangkok, 10200, Thailand, TH
Located alongside the Mae Nam Chao Phraya River banks and within the Banglampoo district, the Phra Sumeru Fortress is a particularly historic and eye-catching building, instantly recognisable by its ornate white facade and octagonal walls with detailed carved figures. In the centre of Bangkok's Phra Sumeru Fortress you will find a tall watchtower. Nearby the riverside walkway leads to a pier, where regular pleasure cruises are available.
Open hours: daily - 24 hours
Admission: free 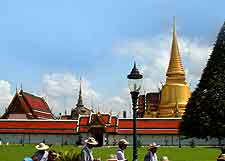 Address: Na Phralan Road, Phra Borommaharatchawong, Bangkok, 10200, Thailand, TH
Tel: +66 02 222 0094
One of Bangkok's most famous and noteworthy architectural landmarks, the Grand Palace was the official residence of Thailand's king and royal family, right up until the middle of the 20th century. Built in the 1780s, the palace lies on the eastern side of the Mae Nam Chao Phraya River and comprises a series of separate buildings and pillars clad with detailed mosaics, surrounded by beautiful gardens boasting many neatly clipped trees. The Wat Phra Kaew temple is particularly impressive and known for its Emerald Buddha.
Open hours: daily - 08:30 to 16:30
Admission: charge 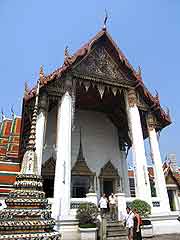 Address: 2 Sanamchai Road, Phra Borommaharatchawang, Bangkok, 10200, Thailand, TH
Tel: +66 02 222 19911
The biggest and most historic 'wat' temple in the whole of Bangkok, the Wat Pho is known for its huge reclining Buddha and also its extensive collection of Buddha images, the largest of its kind in the whole of Thailand. Completed in 1781, this magnificent structure stands on the site of a previous temple dating back to the 16th century,
Open hours: daily - 08:00 to 17:00
Admission: charge

Address: 248 Phrasumen Road, Bowonniwet, Bangkok, 10200, Thailand, TH
Tel: +66 02 281 28313
One of Bangkok's most notable temples, the Wat Bowonniwetwihan was founded in the early 19th century and today houses many important organisations, including a Buddhist university and also the Buddhist Thammayut Monastic Sect headquarters. A number of Thailand's kings once lived within this temple as part of their monkhood, such as both King Rama IV and also King Rama VII.
Open hours: daily - 08:00 to 17:00
Admission: free 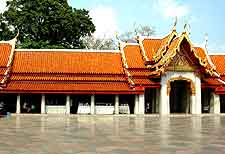 Address: Corner of Th Phra Ram V and Si Ayuthaya, Bangkok, Thailand, TH
Standing proudly in central Bangkok and constructed of white Carrara marble, the Wat Benchamabophit was built during the latter part of the 19th century. Highlights include 53 images of Buddha in the courtyard area, a large contemporary cruciform 'bòt' and also the ashes of King Rama V, which reside at the base of the central Buddha image.
Open hours: daily - 08:00 to 17:30
Admission: charge

Address: Yaowarat, Bangkok, Thailand, TH
Tel: +66 02 623 1226
The Wat Traimit is a particularly famous local landmark, since it is home to a huge solid-gold Buddha, which is 3 metres / 10 feet in height and weighs more than 5 tonnes. The temple itself is particularly old and believed to date back to the early part of the 13th century.
Open hours: daily - 09:00 to 17:00
Admission: charge 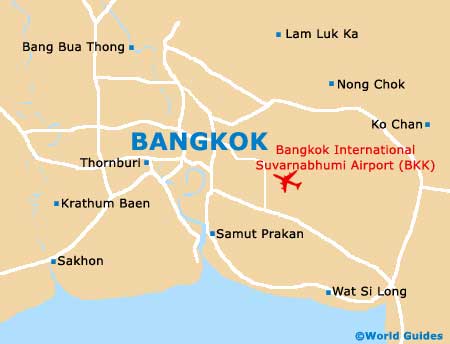