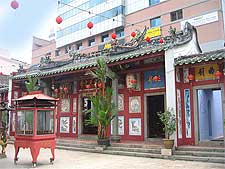 Johor Bahru is a relatively new city, with its history dating back just over 150 years. It was founded in 1855 by the state's ruler Temenggong Daing Ibrahim, who set up his administrative headquarters here. At the start of its life, Johor Bahru was called Tanjung Puteri and was just a sleepy fishing village.

It was first renamed Iskandar Puteri in the year of 1858. A few years later and now a small town, it was given its present-day name by Ibrahim's son and heir, Temenggong Abu Bakar, on the first day of 1866, to mark the opening ceremony of its renowned Grand Palace, the Istana Besar.

The village rapidly grew into a town during the reign of Abu Bakar. A number of Johor Bahru's most famous landmarks, including the previously mentioned Istana Besar, the residence of the Menteri Besar (Great Minister) and also the Sultan Abu Bakar State Mosque (Masjid Negeri), were built during this time. Bakar's ruling was also the period in Johor Bahru's history that witnessed the first arrival of Chinese migrants.


The development continued and in the first decade of the 20th century, work to lengthen the Malay Peninsula railway was finished. In 1923, the Johor Bahru Causeway connecting the Malay Peninsula and Singapore by road and rail was opened. The town's development was not rapid during the World Wars, although the Sultan Ibrahim Building - the state secretariat building, was finished in the early 1940s. In essence, the rise of the town owed its fortunes to Singapore, just off its shore. 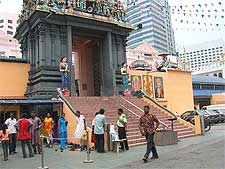 The Japanese army invaded and took control of the town at the end of January, 1942. The Sultan's Istana Bukit Serene residence was transformed into Japan's military base prior to the Battle of Singapore. The strategic importance of this could not be underestimated, since Singapore was a key base for the Allies in South-East Asia and its fall was swift, traumatic and deadly for those in the tiny British colony. From their base in Johor Bahru, the Japanese were able to march in without much resistance, shocking the British war effort in Asia.

History of the Malay Nationalism

The year after the Second World War finished, the town became renowned for Malay nationalism - a political movement aimed at the country being awarded independence. In May of that year, local politician Dato Sir Onn bin Jaafar (Onn Jaafar), who would later become the town's Menteri Besar, created the United Malay National Organisation after Malays made their feelings known about the rather lenient citizenship laws, which the British government had granted non-Malays.

Again, this had significant consequences, because the Chinese leadership in Singapore could not accept the terms of favouritism that the new post-independence government of the Malaya Federation wanted to afford Malays. As a result, they left the Federation in 1965 and were far more successful going it alone. This had positive knock-on effects in the recent history of Johor Bahru, since this was the nearest Malaysian town and therefore enjoyed the greatest economic benefits. 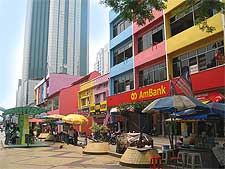 Johor Bahru expanded further from the 1960s onwards. During the next two decades, industrial estates and new suburbs were built in settlements on both the northern and eastern sides of the town, including Plentong and Tebrau. On 1st January 1994, the town was officially recognised as a city. The Dataran Bandaraya Johor Bahru, the city's principal public plaza, was subsequently built to commemorate this significant event.

Work continued in the city, including the development of the central business district. The federal and state government have injected large sums of money into Johor Bahru's development over the last 20 years, which has seen the city become Malaysia's second-biggest urban area.