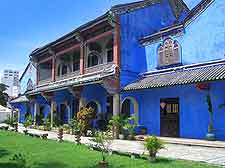 With its diverse mixture of cultures and history, Penang features a wealth of landmarks and monuments that are a testament to its varied past. These include temples such as Kuan Yin, Kek Lok Si and Snake Temple.

Many of Penang's landmarks, such as Cheong Fatt Tze Mansion, provide insight into the notable characters who played a role in building the island's wealth. In particular, the Clock Tower provides a reminder of Britain's place in the island's history. For a look at modern Penang, KOMTAR is a well-known landmark that houses government departments, commercial offices, shops, department stores and restaurants. 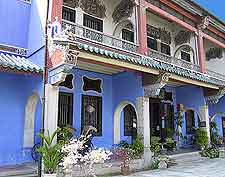 Address: Lebuh Leith, Penang, Malaysia, MY
Tel: +60 4262 0006
This stately mansion featuring 18th and 19th century Chinese architecture is the former home of Cheong Fatt Tze, a powerful industrialist and first-class Mandarin in the Manchu government, who migrated to Java in the 1850s and later moved to Penang in the early 1890s. He was Consul-General in Singapore and the Empress Dowager's economic advisor, had eight wives and owned many homes throughout his trading empire, but made this particular island his base. Cheong Fatt Tze Mansion was constructed from 1896 to 1904 by master craftsmen from China. Today it is used as a hotel, and tours are conducted regularly.
Open hours: daily
Admission: free 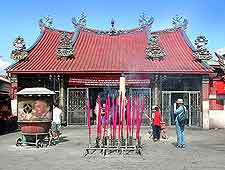 Address: Jalan Masjid Kapitan Kling, Central Georgetown, Penang, Malaysia, MY
Penang's oldest standing temple, Kuan Yin was built to honour the Chinese Goddess of Mercy. It was erected by Hokkien and Cantonese settlers in 1800 and is a fine example of ancient Chinese temple architecture decorated with stone dragons and intricate carvings. Be sure to find the statue of Kuan Yin, which depicts a woman with 18 arms, in an inner chamber of the temple.
Open hours: daily
Admission: free 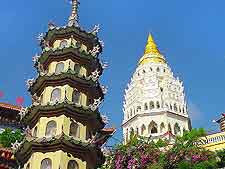 Address: Ayer Hitam, Penang, Malaysia, MY
Tel: +60 4828 3317
Arguably Penang's most famous landmark, Kek Lok Si is a temple complex on a hill and incorporates elements of Burmese, Chinese and Thai architectural styles. Dominating the temple complex is a seven-tiered pagoda known as Ban Po Thar, erected in honour of the Boddhisattva Tsi Tsuang Wang. This is Malaysia's largest Buddhist temple and took more than 20 years to build. A warning for the unfit - visitors have to climb 30 metres / 98 feet to reach the temple complex. However, the narrow steps are lined with stalls selling all sorts of quirky oddities.
Open hours: daily
Admission: free 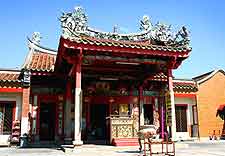 Address: Sungai Kluang, Bayan Lepas, Penang, Malaysia, MY
Not for the faint of heart, Penang's Snake Temple is a one-of-a-kind landmark that visitors would be hard-pressed to find anywhere else in the world. Named for the pit vipers that coil themselves around the altar's pillars, the Snake Temple - or the Temple of the Azure Cloud - is located about 3 km / 2 miles from the airport and was built in 1850 to honour Buddhist healer and priest Chor Soo Kong. Although the snakes are apparently tamed into submission by the incense that perennially burns here, as an added precaution the venom has been removed from all the vipers and there are snake handlers on hand.
Open hours: daily
Admission: charge 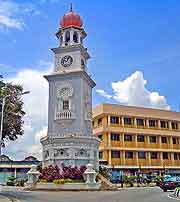 Address: Jalan Tun Syed Sheh Barakbah, Georgetown, Penang, Malaysia, MY
Presented to Penang by local millionaire Cheah Chen Eok in 1897, the clock tower is a prominent Penang landmark and commemorates the Diamond Jubilee of Queen Victoria. It stands 18 metres / 60 feet in height, with each foot representing one year of the Queen's reign. Sadly, Queen Victoria died before the clock tower was finally finished, in 1920.
Open hours: daily
Admission: free 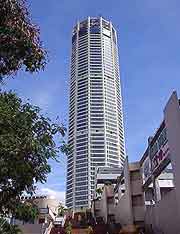