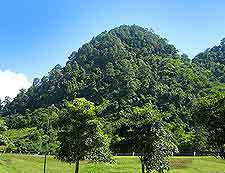 The island of Penang has long been one of Malaysia's most popular tourism destinations, due to its sandy beaches, Colonial architecture, delicious cuisine, plentiful tourist attractions and diverse culture. Because Penang - referred to as the 'pearl of the Orient' - is home to a wide variety of ethnicities, the island boasts its own flavour, with attractions often being quite different from those within the rest of Malaysia. It is separated from the west coast of the mainland by a 5-km / 3-mile shipping channel, giving it much significance as a trading port.

Georgetown is Penang's capital city and features a wealth of attractions, while outside the city limits there are a number of interesting tourist-related sites worth checking out as well. These include the Butterfly Farm, Bukit Panchor Recreational Forest, Penang Hill, Fort Cornwallis and Chinatown. 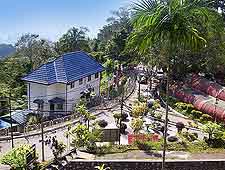 Address: Penang Hill, Penang, Malaysia, MY
Its less-than fancy name is deceiving, as Penang Hill is actually more of a resort, offering tourists respite from the tropical heat, prime views over the sea and Georgetown, gardens, walking trails, a Muslim mosque and a Hindu temple, amongst other attractions. Small railway cars shuttle visitors to the top, a trip that takes about 30 minutes. Once a retreat of the British during the island's hot season, Penang Hill rises over 88 metres / 289 feet above the sea. Physically fit visitors can make the semi-strenuous climb up the hill themselves, a trek which takes about four hours.
Open hours: railway operates Sunday to Thursday - 06:30 to 21:30, Friday and Saturday - 06:30 to 23:15
Admission: charge for railway ticket 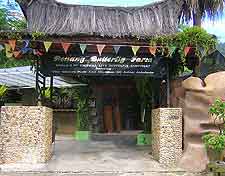 Address: No. 830, Jalan Teluk Bahang, Penang, Malaysia, MY
Tel: +60 4885 1253
Holding the title of the world's first tropical butterfly farm, this attraction features more than 4,000 Malaysian butterflies from 120 species. The farm's main draw is the giant enclosed area, where the butterflies fly freely around in a green, plant-filled environment. Penang's Butterfly Farm is popular with children and adults alike, as it also features education and research facilities.
Open hours: Daily - 09:00 to 18:00
Admission: charge, discount available for seniors and children aged four to 12 years old, children aged three years old and younger are free

Address: Nibong Tebal, Penang, Malaysia, MY
Tel: +60 4262 5272
Developed in 1963, this lush lowland forest is approximately 50 km / 31 miles from Georgetown and offers visitors a chance to examine a variety of fauna and flora. The Bukit Panchor Recreational Forest is a popular destination for both residents and tourists, as there are camping facilities and many opportunities for recreational activities, including a walkway across a freshwater swamp that allows visitors to explore a unique mangrove environment. At night, brave visitors can take a bat cave tour.
Open hours: daily
Admission: charge 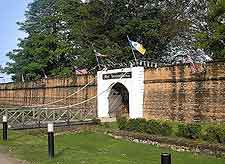 Address: Padang Kota Lama, Penang, Malaysia, MY
Tel: +60 4262 0202
Constructed at the site where Captain Francis Light landed at Penang in 1786, Fort Cornwallis was built to protect the harbour from possible French attacks. Named after Governor General of India Charles Marquis Cornwallis, it was originally a wooden fort, but was rebuilt into a concrete structure in 1808 to 1810 by convicts. Today, visitors to Fort Cornwallis will find a gallery featuring historic displays, an open-air amphitheatre, a public park and a handicraft centre. Particularly notable are the Dutch cannons, a famous feature of the fort given as a gift to the Sultan of Johor from the Dutch in 1606.
Open hours: daily - 08:30 to 19:00
Admission: charge

Address: Chinatown, Georgetown, Penang, Malaysia, MY
Incredibly well-preserved, Chinatown offers visitors a chance to experience life as it might have been like for the early Chinese settlers, who arrived on Penang in the 1800s. The Chinatown area of Georgetown is brimming with oriental attractions of great interest and covers a vast area, extending from Weld Quay to Lebuh Campbell, Lebuh King, Lebuh Muntri and Lebuh Stewart, being lined with typically Chinese architecture, including temples, shop houses and clan houses.
Open hours: daily
Admission: free