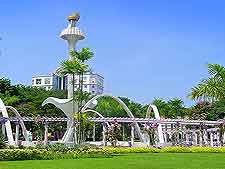 Surprisingly well placed for day trips around much of Malaysia, Penang is close to many appealing cities, towns, beaches and island attractions. The Langkawi is a popular group of islands numbering no less than 99 and situated some 30 km / 19 miles off the coastline of north-westerly Malaysia, where their coastal attractions are within easy reach of Penang and much visited.

Day trips and excursions are also eminently possible to Malaysian locations such as Alor Star, Butterworth, Ipoh, Kota Bharu and the Perhentian Islands. Even the attractions of Hat Yai in Thailand are within reach of Penang, where sights to see include the Ton Nga Chang Waterfall, and the Wat Hat Yai Nai - a huge Buddha statue measuring around 15 metres / 49 feet high and just over 34 metres / 115 feet in length. 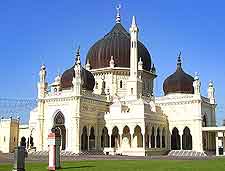 Alor Star serves as the state capital and is a large city, currently called home by more than 300,000 residents and lying on the western coastline of the Malaysia peninsula. Known for its cultural attractions and paddy plantations, sightseeing opportunities within Alor Star include the State Art Gallery (Balai Seni Negeri), the contemporary Royal House at Lorong Shariff, the towering Menara Alor Star, and also the Zahir State Mosque, which is reputed to be amongst Malaysia's finest.

Address: Thailand
Hat Yai is located directly to the north of Penang and actually resides within southern Thailand, in the Songkhla Province, where it is the fourth-biggest city within the whole country. There are a number of tempting attractions spread around the city, such as the Hat Yai Municipal Park, which serves as an important recreational space. 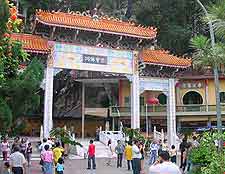 The Malaysian city of Ipoh is the capital of the Perak station and around 200 km / 124 miles to the north of Kuala Lumpur, and some 140 km / 87 miles to the south-west of Penang Island. Ipoh has grown up around the Kinta River, which today is divided into the Old Town and the New Town areas. The Old Town district of Ipoh is known for its large lake, Japanese garden and recreational attractions, all of which are to be found within the Coronation Park. The acclaimed limestone caves of Ipoh also deserve a mention, with the cave temple of Kek Lok Tong being a must-see. 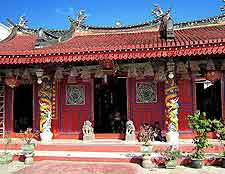 Sited to the far north-east of Penang, within the state of Kelantan and close to the border with Thailand, the city of Kota Bharu is home to popular attractions such as the Kota Bharu Central Market and the huge shopping mall at the Kota Bharu Trade Centre. However, it is the beaches of Kota Bharu that succeed in drawing the largest crowds by day, although as the sun sets, the night-time markets awake. Museum-goers will enjoy the various museums on offer within Kota Bharu, which celebrate local handicrafts, and historical and royal Kelantanese traditions. 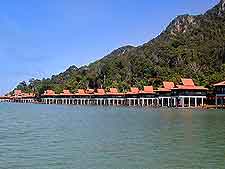 Pulau Langkawi is the biggest of the Langkawi islands and features a population of more than 40,000 people. Tourists flock to Pulau Langkawi in their droves, to take full advantage of the glorious sandy beaches, the tropical scenery, and the endless nature-based attractions. Popular island beaches include the Burau Bay, the Pantai Cenang and also the Pantai Kok. 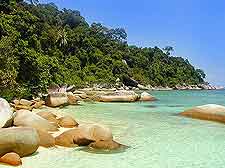 At around 19 km / 12 miles to the north-east of mainland Malaysia, the Perhentian Islands are really too far to make a day trip from Penang possible, being best suited to longer excursions and short breaks. The white sandy beaches on the Perhentian Islands have long been a major attraction, together with the crystal clear waters, coral reefs and coastal resorts with cabin-style accommodation. Both snorkelling and scuba diving come highly recommended, as well as shark watching and fishing. 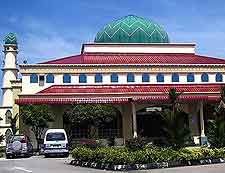 Seberang Perai is the name of the region located directly to the east of Penang and is literally just a matter of minutes away, across the connecting bridge. The number one attraction within Seberang Perai is the town of Butterworth, where much of the action takes place. Particular favourites within Butterworth include the Penang Bird Park, which contains in excess of 300 different species of birds, originating from throughout South-East Asia. 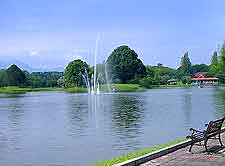 Taiping resides within the state of Perak and on the westerly coastline of Peninsula Malaysia, being around a 90-minute drive from Penang. Those who make the effort to come to Taiping will find attractions in the form of the Lake Gardens, Taiping Zoo and its Night Safaris, the Matang Mangrove Forest Reserve and the elevated Maxwell Hill (Bukit Larut) hill station. Food in Taiping comes cheap and is usually very tasty and memorable.