Getting Around, Kalimantan Travel, Transport and Car Rental

The public transport network throughout Kalimantan is generally quite reasonable around the main cities and towns, such as Balikpapan, Banjarmasin, Pontianak and Samarinda. However, the dense jungles and changing terrain of Kalimantan can make it quite challenging to travel to some locations on the island.

Bus transport is always popular with tourists, although the roads can vary between tarred stretches and bumpy dust tracks. Therefore, locals often choose to travel around the coast of Kalimantan by boat, which is generally quicker, although more expensive. For longer journeys, it will likely save you a lot of time if you simply take a cheap flight to your chosen destination.


Of note, Seppingan is actually the only entry point of the island where visas can be issued. If you are arriving elsewhere on Kalimantan, whether travelling by plane or boat, visas will always need to be obtained prior to your arrival.

There are airports distributed all across the island of Kalimantan, although the airports at Balikpapan, Banjarmasin and Pontianak are the busiest by far. Airlines here offer flights throughout the island, as well as to Bali, Sulawesi, Singapore and destinations on Java, including Jakarta, Surabaya and Yogyakarta. The complete list of Kalimantan's airports are as below:

The roads of Kalimantan are of a variable condition, being best developed around the main cities, towns and resorts, such as Balikpapan, Banjarmasin, Palangkaraya, Pontianak and Samarinda. Rental cars are a convenient mode of transport for some people, and lengthy distances can be covered. For example, it is quite possible to travel from Pontianak, all the way to Kuching (East Malaysia) in under eight hours, although the road can be particularly poor at times, with numerous potholes and rough surfaces en route. The Trans-Kalimantan road is also not always in good shape, although with some patience and a good vehicle, you can travel to Banjarmasin, from provinces in both Central and East Kalimantan.

In West Kalimantan, the bus station in Pontianak (on the Jalan Sisingamangaraja) is especially important and is located on the north-westerly side of the city, at Batu Layang. From here, bus transport connects Pontianak, Sambas, Sanggau, Singkawang and Sintang, and well as making the long ten-hour journey to Kuching. There are also some small bus terminals in central Pontianak, including the Kapuas Indah Terminal, where 'opelet' minibuses offer a quick and very affordable way to travel around the city.

Buses in South Kalimantan are centred around Banjarmasin, where buses travel between Balikpapan (15 hours), Banjarbaru (45 minutes), Barabai (four hours), Kandangan (three hours), Marabahan (two hours), Margasari (three hours), Martapura (30 minutes), Muara Teweh (12 hours), Negara (four hours), Pagatan (five hours) and Samarinda (17 hours). In East Kalimantan, the bus station at Balikpapan is always busy and is known as the Batu Ampar, being located on the northerly side of the city and offers transport to Banjarmasin and Samarinda. From Palangka Raya in Central Kalimantan, buses run to Banjarmasin (six hours) and even Pangkalan Bun (14 hours). Kijang 4WD jeeps are also available here and travel to Banjarmasin on a regular basis.

There are currently no passenger trains in operation on the island, although a small railway network does exist, being used mainly for the transportation of coal.

Most visitors flying into Kalimantan will find that taxis are the best way to travel to your chosen hotel. Taxis are usually fairly easy to come by and fares should always be calculated by meters. Popular alternatives to taxi transport are shuttle microbuses (angkot), which many locals actually refer to as taxis or taxi buses. These 'angkot' minibuses are cheap, although not usually very comfortable and often a little crowded. 'Ojek' motorcycle taxis are also notable, as well as 'becak' tricycle rickshaws.

A number of different ferry routes link Kalimantan with further Indonesian islands, such as Java and Sulawesi. The island's main seaports are to be found at Balikpapan, Banjarmasin, Pontianak and Samarinda. Fast speedboats also depart from the small harbour at Nunukan, on the coastline of East Kalimantan, and travel to Tawau in Sabah (Malaysia). When there are rivers on the islands, motorized canoes are never far from hand, while in more remote areas, river taxis (taxi sungai) often operate. 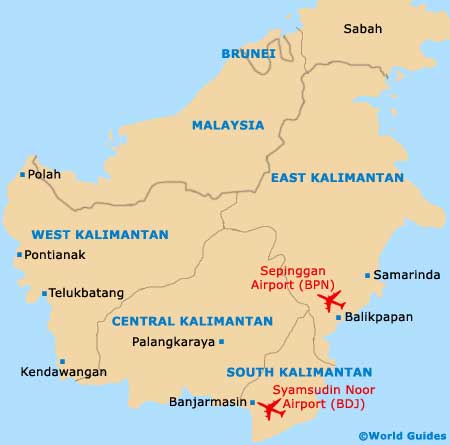