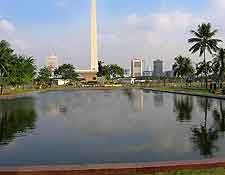 Most of Jakarta's key landmarks are found in the old quarter (Batavia), where ancient architecture abounds. The historical Dutch drawbridge over the Grand Canal may have lost its ability to raise and lower, but it still attracts plenty of attention. Equally ancient in Jakarta is the Vihara Dharma Bhakti Buddhist temple, which remains an active place of worship.

There are a few prominent modern sites and landmark on display within Jakarta as well. Most notable is the National Monument, a towering obelisk that proclaims the nation's independence. As the city's most famous landmark, the obelisk attracts significant attention with its 130-metre / 427-foot tall tower. 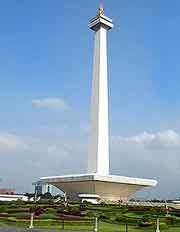 Address: Jakarta, Java, Indonesia, ID
Tel: +62 021 384 0451
This striking monument (known locally as 'Monas') is the best-known landmark in Jakarta. Its crowning feature is a massive, flame-shaped ornament of solid gold perched at the top of the obelisk. Commissioned by Sukarno in the 1960s, the monument is a tribute to Indonesian independence and hard to miss, dominating much of the surrounding area.
Open hours: daily - 09:00 to 16:00
Admission: charge

Address: Batavia, Jakarta, Java, Indonesia, ID
The Kota district is the central tourist area in Jakarta. The main attractions here are strung across a network of cobblestone streets that also host a variety of dining and shopping venues. Located in the very heart of the Kota district is the Taman Fatahillah plaza, where the ambient nostalgia transports visitors back through time.
Open hours: daily
Admission: free 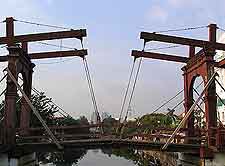 Address: Jakarta, Java, Indonesia, ID
Tel: +62 021 315 4094
Jakarta's best-kept colonial architecture is a 17th-century drawbridge spanning the Grand Canal. When it was built, Jembatan Pasar Ayam served to unite the Dutch and British forts stationed on either side of the canal. Though the drawbridge no longer functions, it remains one of the city's most magnificent landmarks and a much-loved piece of history.
Open hours: daily
Admission: free 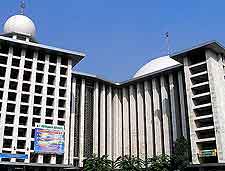 Address: Jalan Veteran I, Jakarta, Java, Indonesia, ID
Tel: +62 021 520 5455
This beautiful mosque is the largest in the whole of South-East Asia. The mosque was built to commemorate the nation's independence from the Netherlands in the mid-20th century. This majestic local landmark employs minimalist decorative touches and is reminiscent of mosques in Arabic nations.
Open hours: daily (off-limits to tourists during prayer time)
Admission: free

Address: 97 Jalan Kemenangan III, Jakarta, Java, Indonesia, ID
Tel: +62 021 315 4094
The Vihara Dharma Bhakti is actually Jakarta's oldest temple and this impressive Buddhist shrine dates from the mid-17th century, when it was built to honour the goddess of mercy, Kuan Yin. In its first century, it was razed and rebuilt, and it continues to function as an active place of worship today, not only for Buddhists but for Confucians and Taoists as well. Incense wafting from the main hall cloaks the Buddhist effigies in the side wings.
Open hours: daily - 05:00 to 17:00
Admission: free