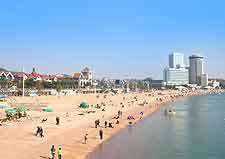 Qingdao stands on the southern coastline of the Shandong Peninsula and is a particularly picturesque part of China. Known for its German heritage, Qingdao rather surprisingly boasts an almost Bavarian atmosphere, and as a result of its pretty appearance, the city is often referred to locally as 'China's Switzerland'.

Due to its impressive coastal setting, Qingdao was picked to host a number of sailing events at the prestigious Olympic Games in 2008, with much of the city being revamped in preparation for the influx of tourists. Qingdao's tourism industry is therefore particularly prosperous at the moment and many people immediately head to its sandy beaches, seafront and bays, which stand to the south. The historic part of Qingdao is especially scenic and full of character and temples, being located to the west, while to the east you will find the main areas of commerce, together with many high-rise hotels, shopping districts, restaurants and lively nightspots.

Around the city you will find various tourist information centres, such as the China International Travel Service (CITS) on Xianggang Xilu and also the Qingdao Tourism Information and Service Station on Haian Jie. For those looking for web access, the city contains plenty of Internet cafes, which are especially clustered around Times Square, known locally as Shidai Guangchang. 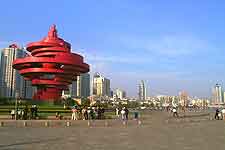 Many of the most popular tourist attractions around the city of Qingdao are based around its stunning, numbered sandy beaches, which are close to the heart of the city. Other top sights to see include the Laoshan National Park - a vast park in the city's greenbelt, overlooking the Yellow Sea; Signal Hill Park / Xinhaoshan Park - featuring scenic pathways and views across the Qingdao cityscape; Taipingshan Park - home to chair-lift rides, a historic tea house and the breathtaking Buddhist Zhangshan Temple; Huadong Winery - situated in the nearby Laoshan mountains and featuring guided tours; Qingdao's Tsingtao Brewery - founded more than 100 years ago and famous for its beer production; and also Ocean Park - a family amusement park with plenty of thrill rides to keep you occupied for hours. More information about Qingdao Tourist Attractions. 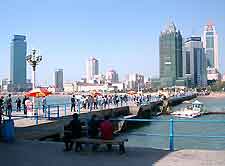 Around the city of Qingdao you find many stunning landmarks hard to miss, both old and new. Highlights include the historic Qingdao Protestant Church - dating back to 1910 and featuring a high bell tower; Jiaozhou Governor's Hall - a former government building and known for its grand architecture; Qingdao Catholic Church - featuring a strong German colonial influence and a particularly ornate interior; and the Zhangqiao Pier - lying at the very tip of Qingdao Bay and famous for being the city's first ever wharf. More information about Qingdao Landmarks. 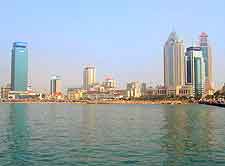 Several excellent museums reside in the city of Qingdao and are worth a look. The best include Qingdao Museum - home to a range of cultural information about the city's past, including many artefacts from the Yuan Dynasty; Navy Museum - full of military history and offering visitors the chance to experience life on a submarine; and the Marine Products Museum - a traditional aquarium attraction with more than 60 tanks showcasing many superb marine creatures, including dolphins. More information about Qingdao Museums. 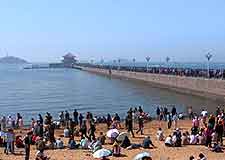 Close to the city of Qingdao, many truly outstanding coastal attractions and tourist destinations await, being popular daytrips or excursions. The bustling port city of Yantai is especially appealing and home to a couple of excellent sandy beaches. Also worth considering and close to Qingdao is the alluring resort of Rizhao, next to the scenic Haizhou Bay, and nearby Weihai, where a busy harbour, the Shandong University campus and the neighbouring island of Liugong all stand out as definite highlights. More information about Qingdao Attractions Nearby.