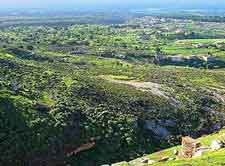 Legislation to establish national parks in Libya was put in place as long ago as the late 1970s. Despite this, sustainable tourism is still very much in its infancy. However, a small number of national parks, nature reserves and protected areas have been created.

Many of these help to conserve Libya's fragile Mediterranean coastline environment, expanses of Saharan desert and concentrations of North African wildlife. The best known include the national parks of both El-Kouf and Karabolli, as well as the nature reserves of Benghazi and Zellaf.

The El-Kouf National Park is a marine protected area located near the town of El Beidha, on the north-eastern side of Libya. This park extends along the country's Mediterranean shore for approximately 20 km / 12 miles of coastline and encompasses beaches, sand dunes and lagoons, whilst also covering a protected area that includes the northern slopes of Jabel Al Akhdar mountain. As well as providing an ideal protective environment for marine fish and mammals, such as common and bottle-nosed dolphins, the park's animal life includes hyenas, golden jackals and small-spotted genets (a cat-like creature).

Situated in the north-west part of Libya, the Karabolli National Park is located close to the town of Al Garabulli, being roughly 50 km / 31 miles to the east of Tripoli. The park boasts a series of spring-fed streams and covers mostly areas of sand dunes, beaches, cliffs and salt lagoons. Almost 100 species of birds have been recorded in the park, which was designated as such in 1992 in order to counter coastal erosion in the area.

Located close to the city of Benghazi and on the northern shore, this nature reserve is an important place for keen bird watchers with a particular interest in migratory birds. As well as an area of coastline, the reserve also includes a spring-fed lagoon.

The Zellaf Nature Reserve lies on the south-western side of the country, in the Sabha area. Covering a vast 1000 square kilometres / 385 square miles, the reserve is the one designated conservation area to be found within the Sahara Desert.