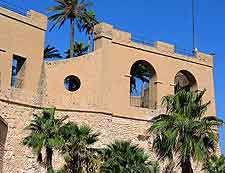 Libya is thoroughly blessed with a fascinating past and this can be viewed by visiting its many museums. It has to be said that information on these museums is fairly limited at the moment, although with the development of tourist facilities this should improve. Tripoli's cultural attractions are amongst the country's best, with both the Jamahiriya and the Islamic Museum standing out in particular.

To get a closer look at Libya's art collections, it is often necessary to head into the desert. Prehistoric rock art can't be found in traditional galleries as such, but rather in the caves in which these ancient creations were painted. 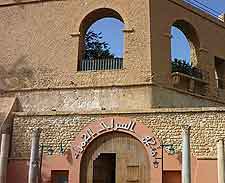 Address: Green Square, Tripoli, Libya, LY, Africa
Tel: +218 0121 333 0292
Built in collaboration with UNESCO, the Jamahiriya is Libya's most important cultural offering and is home to an excellent collection of exhibits dating from the Neolithic Age right through to modern times. Also commonly known as the Museum of the Red Castle, the Assaraya Alhamra or the Archeology Museum, the Jamahiriya boasts an extensive collection of artefacts and these are displayed in around 40 individual gallery spaces, including themed Prehistoric, Libyan Heritage and Greek galleries. Particularly notable are exhibits from the Ghirza Mausoleum, as well as evidence of Phoenician, Egyptian and Roman influence, all housed on the first floor. The Byzantine and Islamic eras of Libyan history are also well covered here, accompanied by many references to the country's infamous long-time leader and revolutionary, Muammar Muhammad al-Gaddafi. As you explore the exhibits, keep an eye out for the superb classical art works, which are some of the best on display anywhere in the Mediterranean.
Open hours: Saturday to Thursday - 08:00 to 14:00, 16:00 to 18:00
Admission: charge (joint entry ticket with castle)

Address: Tripoli, Libya, Africa
Tripoli's Islamic Museum is to be found within the Al Sur area of the city and has recently enjoyed some much-needed renovation work. There are a number of items and exhibits of interest on display here, although it is the architecture and ornate features that draw the visitors, such as the curved windows, the huge doorway arches and the elaborate floor tiles. Of particular note is the original central Ottomon-Turk courtyard and its fountain centrepiece, while the mature palm trees outside add a tropical feel.
Open hours: Saturday to Thursday - 08:30 to 18:00
Admission: charge 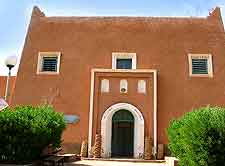 Address: Ghadames, Libya, LY, Africa
The museum at Ghadames has an extensive collection of objects relating to the archaeology and culture of Libya, displayed in various wings. These range from Stone Age fossils, temple remains and 'Desert Rose' crystals, to old town maps, traditional woven palm-leaf creations, reed furniture, leather crafts, and preserved creatures, showcasing the surprising amount of wildlife living in the Sahara Desert. Another onsite attraction is an ethnographic section filled with an array of traditional costumes, including clothing worn at wedding ceremonies. There is also a section dedicated to the evolution of local Ghadamsian doors, and a small display of old mugs used when milking camels.
Open hours: Saturday to Thursday - 08:30 to 15:00
Admission: charge

Address: Tobruk, Libya, LY, Africa
The Military Museum, sited in an old church within the north-easterly seaport city of Tobruk, is dedicated to the conflict that took place in and around Tobruk during the Second World War. This attraction is home to numerous relics left on the battlefield. It also has on display the remains of the American B-24 Liberator known as 'Lady Be Good', a plane that was recovered from the encroaching desert sands in 1958 in tragic circumstances.
Open hours: Saturday to Thursday - 08:30 to 15:00
Admission: charge

Address: Leptis Magna, Libya, LY, Africa
The archaeological museum at Leptis Magna houses many remains which date back to Phoenician and Roman times. These include a selection of Roman busts and statues, pottery, tableware and some well-preserved pieces of jewellery. Of particular interest are the ancient archaeological finds from Wadi Caam, which date all the way back to the 3rd century BC.
Open hours: Tuesday to Sunday - 08:30 to 15:00
Admission: charge 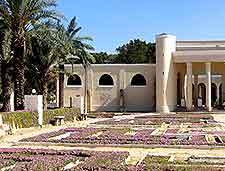 Address: Sabratha, Libya, LY, Africa
Formerly named the Classical Roman Museum, this building has been recently renovated and reopened to the general public. The onsite collection includes some vast mosaic panels which were taken from the Basilica of Justinian. The galleries also house beautiful frescoes and statues, as well as remnants of regional temples. In the western wing are some interesting relics collected from Sabratha tombs, while the eastern wing is where you will find a group of fine frescoes, mosaics and statues from the Capitoleum (formerly the Temple of Zeus).
Open hours: Saturday to Thursday - 08:00 to 18:00
Admission: charge

Address: Qasr, Libya, LY, Africa
The Qasr Museum is home to some remarkable panels of intricate and well-preserved mosaics. Discovered in a nearby Christian church by local labourers digging for building stone, the mosaics were finally excavated in the 1950s. Subjects depicted range from the Pharos lighthouse of Alexandria to scenes of an everyday agricultural nature.
Open hours: Saturday to Thursday - 08:30 to 15:00
Admission: charge