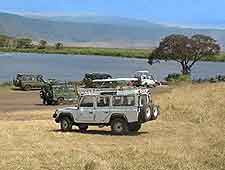 Tanzania has an interesting mix of manmade monuments and natural landmarks. Many of its historic monuments and statues date back to colonial times, when the country was under German or British authority.

In the Tanzanian countryside, natural landmarks include ancient rock paintings, volcanoes, mountains and lakes. Particularly sizable and prominent is Mount Meru, along with the Ngorongoro Crater, the Kalambo Falls and the active volcano named Ol Doinyo Lengai. 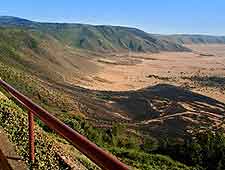 Address: Ngorongoro Conservation Area (NCA), Tanzania, TZ, Africa
The Ngorongoro Crater lies at the heart of a conservation area that encompasses a rich volcanic landscape, complete with lakes and a high concentration of wildlife. In fact, it forms a fairly self-contained safari park all of its own. The crater's vast bowl is some 20 km / 12 miles wide and its sides are up to 600 metres / 1,968 feet deep, making it amongst the planet's biggest caldera. At the bottom of the crater is a fascinating mix of ecological environments, including grassland, forests and swamps, as well as Lake Makat, a soda lake. The Ngorongoro Crater is always a popular destination for visitors on safari.
Open hours: daily - 07:00 to 16:00 (all vehicles must leave the crater by 18:00 at latest)
Admission: charge 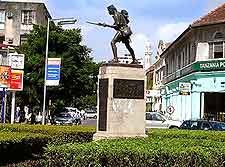 Address: Maktaba Street / Samora Avenue, Dar es Salaam, Tanzania, TZ, Africa
The Askari Monument was erected in 1927. It depicts an armed bronze soldier from World War One, pointing his bayonet towards the harbourfront, and commemorates the role played by African troops during the conflict lasting from 1914 to 1918. The inscription that appears on the monument in both English and Swahili was written by the British author Rudyard Kipling.
Open hours: daily
Admission: free

Address: Mnazi Mmoja, Dar es Salaam, Tanzania, TZ, Africa
Located within the grounds of Dar es Salaam's Mnazi Mmoja Park, this monument was built in 1961 to commemorate the Independence of Tanganyika. The Uhuru Torch symbolises the Freedom Torch that was placed at the top of Mount Kilimanjaro at the time that independence was declared. Over the years, the torch has become nothing short of an iconic national symbol, appearing on the reverse-side of the Tanzanian shilling coin.
Open hours: daily
Admission: free 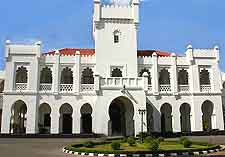 Address: Dar es Salaam, Tanzania, TZ, Africa
Once the residence of the German Governor during colonial times, the State House dates back to the late 19th century. In 1914, the building suffered considerable damage as a result of British military action. This landmark was finally rebuilt during the 1920s, this time in a style that was seen to be more in keeping with its African surroundings. Today, the State House isn't open to the public as it is home to Tanzania's president. However, it's certainly worth a visit, if only to admire the building's arched and crenellated exterior.
Open hours: view from exterior only - interior not open to public
Admission: free 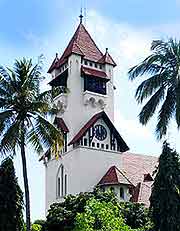 Address: Dar es Salaam, Tanzania, TZ, Africa
The Lutheran Church in Dar es Salaam was built in the closing years of the 19th century by German missionaries. Today, it remains a distinctive building in the city, with its red tiled belfry rising high above the surrounding buildings. The church's gardens are also a welcome sight for visitors who need to recharge their batteries before heading back onto the tourist trail. Of note, the Azania Lutheran Church now serves as a cathedral.
Open hours: daily
Admission: free

Address: Iringa, Tanzania, TZ, Africa
Perfectly preserved at the Isimila Stone Age Site is evidence of prehistoric nomadic hunter-gatherers who lived around what used to be a shallow lake and which is today nothing more than a dry bed. Excavations that took place here during the 1950s first revealed this prehistoric site. Unfortunately, visitors to the site won't see much evidence of the exciting discoveries, which included stone artefacts, tools and fossilised bones, although the rock formations are rather amazing.
Open hours: daily
Admission: charge 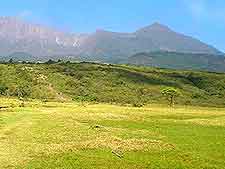 Address: Arusha National Park, Tanzania, TZ, Africa
Mount Meru is Tanzania's second-highest mountain. Situated within the Arusha National Park, it's a favourite haunt of hikers, as well as animal and bird lovers who prefer to steer clear of the crowds attracted to nearby Mount Kilimanjaro. Energetic visitors can hire a guide and follow the trail up Mount Meru. The trail heads through montane forests to the half-way point of Elephant Ridge. From there it's possible to get great views of the summit ridge. Passing through giant heather and moorland, there are options for those with energy to spare to ascend Little Meru at 3,820 metres / 12,532 feet. At 4,350 metres / 14,271 feet, Cobra Point is where hikers can admire views of the cliffs of Meru's Crater Rim and the Ash Cone. From there, a steep path heads up to the summit of Socialist Peak at 4,566 metres / 14,980 feet.
Open hours: daily
Admission: free 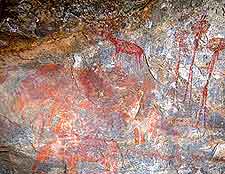 Address: Dodoma, Tanzania, TZ, Africa
The Kondoa Irangi Rock Paintings are reputed to be one of the finest collections of their kind in the world. All in all, there are around 1,600 paintings spread over 200 different sites in the Irangi Hills of Tanzania. The oldest of these rock paintings, which depict simple human figures, rivers and animal silhouettes, are thought to date back a staggering 30,000 years.
Open hours: daily
Admission: free 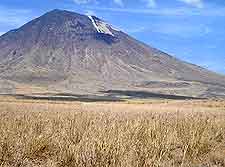 Address: Arusha, Tanzania, TZ, Africa
Tanzania is home to several extinct volcanoes and can also boast one that is active to this day. Ol Doinyo Lengai, which in Maasai means 'Mountain of God' overlooks Lake Natron in the north of the country. This volcano has been explored, photographed and admired since the end of the 19th century. The last known eruption took place in 2010. It is possible to climb the Ol Doinyo Lengai Volcano, although it is a demanding and challenging environment. Therefore, it is advisable to hire a guide or book your trip through an experienced safari operator.
Open hours: daily
Admission: free 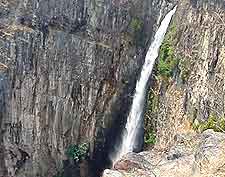 Address: Arusha, Tanzania, TZ, Africa
Marking the Zambian border and located on the western side of Tanzania, the Kalambo Falls drop some 235 metres / 770 feet and rank as the tallest of all Africa's uninterrupted waterfalls. March is a good time to pay a visit to the Kalambo Falls, since heavy rain makes the cascade particularly strong. During the dry season, look out for the marabou storks, who come here to breed on the surrounding cliffs. Just downstream is the Kalambo Gorge, a giant valley with a width of up to 1 km / 0.5 miles.
Open hours: daily
Admission: free 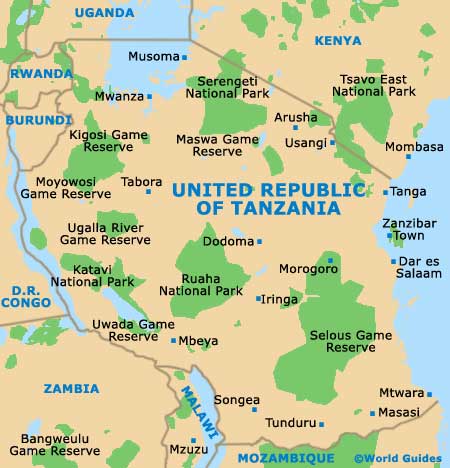