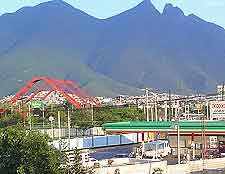 The city of Monterrey is the capital of the Nuevo León (NL) state and one of Mexico's largest cities and business centres. Monterrey has a definite American character and boats many enormous air-conditioned shopping malls and shimmering skyscrapers. A dramatic backdrop of the jagged Sierra Madre Mountains provide plenty of character, with the iconic Cerro de la Silla mountain peaks being particularly famous in Monterrey.

During the 1980s, no expense was spared in revamping Monterrey's historic centre, which boasts a number of interesting gardens and plazas (public squares). It is often the case that many travellers overlook Monterrey, since they don't realise quite how much the city has to offer, with everything from exceptional Mexican restaurants and buzzing nightclubs, to hiking around nearby canyons and lakes.

The very heart of Monterrey is based around the Zona Rosa district, which features a series of pedestrianised streets, linking with the Gran Plaza. Tourism is well developed in this particular area, where various travel agencies reside. For tourist information, the Infotur Tourist Office is Monterrey's official outlet and is located at the Edificio Elizondo Paez. Two further tourist information outlets are sited within the bus station. 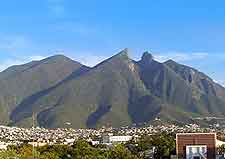 There is always something for tourists to enjoy in Monterrey and attractions are literally everywhere. For families, the water park within the Sesame Street Amusement Park (Parque Plaza Sésamo) is a great way to cool down on a hot day, while the fast rides at the Magic Forest amusement park (Bosque Mágico) are equally popular and appeal to all ages. Monterrey Zoo is always extremely popular and located within the Parque La Pastora (Pastora Park). Other notable tourist attractions include sky shows at the Monterrey Planetarium, a host of recreational activities at the Parque Nacional Cumbres (Cumbres National Park), and plenty of fine dining opportunities around the Gran Plaza o Macroplaza. More information about Monterrey Tourist Attractions. 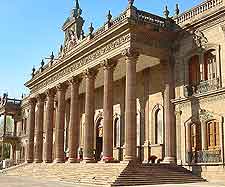 Many magnificent buildings and landmarks reside in Monterrey and include the Old Federal Palace (Antiguo Palacio Federal), which boasts strong Art Deco influences. Also imposing is the Metropolitan Cathedral, which dates back to the early 17th century and took well over 100 years to complete, dominating the area with its bold architecture and twin towers. One of the tallest and most famous modern landmarks in Monterrey is without doubt the Faro de Comercio tower, a tall, thin bright-red structure within the Gran Plaza area. Something quite different and much more historic is Monterrey's State Government Palace (Palacio de Gobierno), which boasts a Neo-classical facade and is central to many of the city's main celebrations, such as the Mexican Flag Day each February. More information about Monterrey Landmarks. 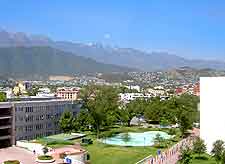 Various museums in Monterrey offer a range of information about many different topics. The Alpha Arts Museum and Planetarium (Centro Cultural Alfa Museo y Planetario) features a host of scientific and astronomical information, while the more traditional Museum of Mexican History (Museo de Historia Mexicana) is a good place to learn more about the country. Also of interest are the many exhibits and art works on display at the Monterrey Glass Museum (Museo del Vidrio), the Arts Centre (Centro Cultural Arte) and at the Museum of Contemporary Art (Museo de Arte Contemporáneo - MARCO), where many stylish modern paintings and sculptures can be enjoyed. More information about Monterrey Museums and Monterrey Art Galleries. 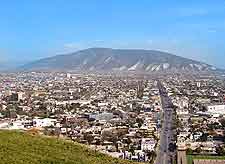 Many interesting sights and tourist attractions lie near to Monterrey and are best reached in your own vehicle, since some are less accessible when using bus transport. Close to Monterrey and worth searching out is the cave system of Grutas de Garcia, the breathtaking Canón de la Huasteca canyon, and also the dramatic Cascada Cola de Caballo waterfalls, which are also a great spot for a photo. The nearby Presa La Boca is another popular excursion and offers many recreational activities, such as windsurfing and fishing. More information about Monterrey Attractions Nearby.