Valencia is Venezuela's third-biggest city and one of the country's oldest cities, earliest Spanish settlements and main industrial hubs. Located roughly 124 km / 77 miles from Caracas, the city may not be particularly known as a tourism destination, but this doesn't mean that there aren't things to do and see in Valencia, the capital of Carabobo state.

With a deserved reputation as a tidy and friendly city, Valencia offers the visitor a selection of interesting historical sites, museums, outdoor parks and a pleasant restored downtown district called the Capitolio, with good transport connections by both road and air (via the neighbouring Arturo Michelena International Airport). Tourism information can be found at the city's tourism office called the Direccion de Turismo de Carabobo, which is located on the Avenida Bolivar Norte and is just a matter of minutes to the north of the Plaza Bolivar.

Valencia may not be your first choice holiday destination, but however you end up here, there are attractions to choose between and sightseeing to plan. If you are here as a family, then the Aquarium and Zoo (Acuario / Fundacion Seijas) will probably be your initial port of call, with its unusual freshwater Amazon dolphins a major highlight. The Dunas Park (Parque Dunas) theme park is another attraction for all ages and young children will always enjoy the fairground rides.

For some green space where you can sit back and enjoy the peace and quiet, the Cerro Casupo Municipal Park (Parque Municipal Casupo) more than provides and is located on the north-westerly side of Valencia, coming with riverside trails and woodland walks. On the city's northern side is the Metropolitan Park (Parque Metropolitano), with its fitness complex, velodrome cycling arena and seasonal concerts. Next door is the Fernando Penalver Park (Parque Fernando Penalver), where there is likely to be something of interest taking place, while if horse racing is more your thing, then the enormous National Racetrack (Hipodromo Nacional de Valencia) is one attraction not to miss, remaining popular since it opened in the 1970s. More information about Valencia Tourist Attractions.

Founded in 1555, Valencia has certainly had its ups and downs over the subsequent years, with ransacking in its early days, attacks by French pirates and a devastating earthquake in 1812, when many of its oldest and most important buildings were left in ruins. Shortly afterwards, the War of Independence arrived, followed by further numerous battles. However, despite all of this past conflict and seismic activity, Valencia remains a city with many attractive buildings, well-maintained and restored where necessary.

The Plaza Bolivar provides a central base for sightseers, being dominated by its 16th-century Cathedral (Catedral). Further local sights of significance include the Capitol Building (Capitolio), the Municipal Theatre (Teatro Municipal) and the simply massive Bullring (Plaza de Toros Monumental). Based within the city's northerly suburbs, the Barbula University of Carabobo (Barbula Universidad de Carabobo) adds a youthful element to the city with its substantial student base. More information about Valencia Landmarks and Monuments.

Central Valencia is called home by a number of old buildings which now function as museums and similar cultural attractions, with the colonial-style Casa de Los Celis being where the Museum of Art and History (Museo de Arte e Historia) resides. At the Casa Paez, the former residence of Venezuela's very first president - Jose Antonio Paez, visitors can expect information about the life of Paez himself, accompanied by art works, murals, antiquities and even a prison-cum-torture chamber.

The City Museum (Museo de la Ciudad) at the Palacio de Los Iturriza is the place to come to learn about the city's eventful past, whilst exploring the sumptuous palace interior. A little different is the outlying Baseball Museum (Museo de Beisbol), where the Mission Hall of Fame remembers some of Venezuela's finest baseball players. More information about Valencia Museums.

Valencia is conveniently close to many attractions within the state of Carabobo and beyond, such as the south-westerly Carabobo Battlefield (Campo Carabobo), which serves as one of the most popular day trips possible here. Slightly closer to Valencia and to the north, tourists may also like to take an excursion to the thermal springs of Las Trincheras, and further north, to the San Esteban National Park (Parque Nacional San Esteban) and its municipalities of Guacara, Naguanagua, Puerto Cabello and San Diego.

The capital city of Aragua state, Maracay is little more than an hour away and is a good stopping-off point if you are headed to the vast Henri Pittier National Park (Parque Nacional Henri Pittier), where indigenous wildlife, nature trails and untouched beaches are amongst the main draws. Next door to the Henri Pittier National Park is the seaside town of Choroni, with its white sandy Caribbean beach of Playa Grande tempting many a tourist and day tripper. Caracas, Puerto Cabello and Puerto Colombia are all additional worthy trips to consider. More information about Valencia Attractions Nearby. 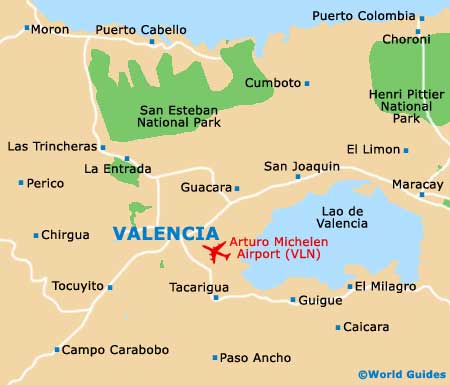