The picturesque Cuban town of Trinidad lies on the south-central coast in glorious countryside and is, together with the nearby Valle de Los Ingenios, a UNESCO World Heritage site famed for its unspoiled historic centre, which is now a major year-round tourist draw. Although the town's main industry is tobacco, tourism plays a major part in its economy, with people coming to admire this charming Spanish colonial settlement and its well-preserved character.

Visitors to Trinidad de Cuba arrive for the famous historic and heritage sites in the compact old town, and stay for the beautiful beaches, the unique laid-back colonial ambience and the friendly, welcoming local people. Although some parts of town, even in its centre, are run down and somewhat decrepit, Trinidad has become one of the most popular visitor destinations on the island. Local tourist information can be accessed at the various travel agencies around town, such as Cubatur on the Calle Antonio Maceo, Havanatur on the Calle Simon Bolivar and Infotur on the Plaza de Santa Ana.

The spectacular white sandy beaches lining the Ancon Peninsula are just one of the reasons why Trinidad has grown into such a popular tourist town, with the Playa Ancon (widely regarded as the south coast's finest beach) and the neighbouring seaside village of La Boca having much appeal, along with the nearby fishing port of Casilda. In the town itself, the main attractions are of a historical nature and a number are based around the Centro Historico Urbano, the Plaza Carrillo, the Plaza de Santa Anna and the Plaza Mayor, the latter of which is dominated by the 19th-century Cathedral Church of the Holy Trinity (Iglesia Catedral de la Santisima Trinidad). In the New Town area, the Central Park (Parque Cespedes) provides an important recreational space and is home to the Municipal Assembly (Asamblea Municipal) and the House of Cigars and Rum (Casa de Habano y Ron), amongst other worthy attractions. More information about Trinidad Tourist Attractions.

Trinidad de Cuba owes much of its past wealth to the sizeable sugar fortunes earned during the early part of the 19th century around the Valle de Los Ingenios, and consequently some of the town's most important and impressive buildings date back to that heady period. The Puerto de Casilda functions as Trinidad's ancient port and today is more like a small fishing village, with a marina used by visiting yachts. Clearly visible on the townscape is the Bell Tower of the 18th-century Convent of St. Francis (Campanario del Convento de San Francisco), while the Manacas Iznaga Tower (La Torre Manacas Iznaga) is another eye-catching sight and for those feeling energetic, a climb to the top will reveal some great views. After that excursion, consider having a drink at La Canchanchara, which was built in the early 18th century and remains the oldest tavern still standing and operating in the town today. More information about Trinidad Landmarks and Monuments.

Whilst this may be a relatively small town, Trinidad does come with a surprisingly long list of museums and cultural highlights, which document, showcase and celebrate the town's five centuries' worth of history. Close to the Plaza Mayor is the Museum of History (Museo de Historico Principal), which is housed within a grand mansion and filled with period antiquities. Another notable mansion is the Romantic Museum (Museo Romantico), where 18th-century treasures offer an insight into the colonial days and lives of the affluent slave-owners. At the Municipal History Museum (Museo Historico Municipal), expect information relating to the town's fast-paced evolution and revolutionary period. More information about Trinidad Museums.

Most tourists planning a day trip will venture no further than the nearby beaches, spending the entire day soaking up the Cuban sun and relaxing. However, if you are prepared to travel a little further, then the Parque Nacional Topes de Collantes warrants exploration and features much Cuban flora and fauna, endless walking trails and a towering mountain peak - the Pico de San Juan. At less than a 90-minute drive away, the city of Santa Clara comes packed with Che Guevara history and some very beautiful churches. A little nearer is the Cuban town of Sancti Spiritus, alongside the Yayabo River, where horse-drawn carriages, a famous Spanish-style bridge (the Puente Yayabo) and the Teatro Principal theatre are all good reasons to visit. Just over 30 km / 19 miles offshore is the neighbouring Caribbean island of Cayo Iguana, which is nothing short of a tropical paradise, resplendent as it is with gorgeous sandy beaches and coral reefs suitable for snorkelling. More information about Trinidad Attractions Nearby. 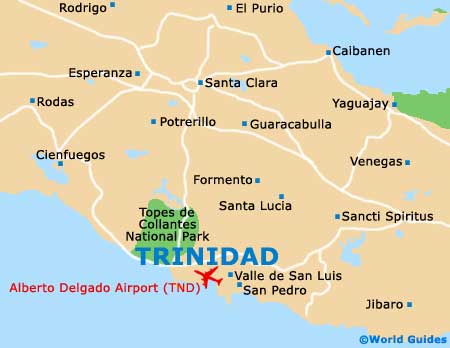