Perched on the gateway between the eastern and western civilisations of the world, Istanbul is one of the world's truly epic cities. Few other modern cities today have as rich a pedigree of culture, commerce and significance.

The history of Istanbul began with the settlement known as Byzantium, before it evolved into Constantinople and then eventually became a part of Turkey. This is now Europe's second-largest urban area straddling the Bosphorus Strait, one of the busiest waterways on the planet.

King Byzas was the first ruler to establish a serious settlement on the European shore of the Bosphorus at around the middle of the 7th century BC. Naming it Byzantium, the city gradually developed into a place everyone wanted to own. The Persians ruled for a brief window in the 5th century BC, before losing Byzantium to the Greeks for the next few centuries. In the year 73 AD, Byzantium became an official member of the Roman Empire, and traces of all these amazing cultures still linger in and around modern Istanbul.

Istanbul changed forever when Constantine I took control of the Roman Empire in 324 AD, following the Battle of Chrysopolis. In a bid to shift Roman power east and away from Rome, he created a new Christian-centred city to replace Byzantium and this was named Constantinople by popular decree.

In the spring of 330 AD, Constantine I proclaimed this city the capital of the Byzantine Empire, and a new centre of Greek Christianity and culture was created. Among the first structures built were churches, including the Hagia Sophia (Sofia) that would be the world's largest cathedral for nearly a millennium. Throughout the Middle Ages, Constantinople was Europe's (if not the world's) greatest city. Well fortified, it kept eastern invaders out of Europe and the influence of Islam at bay. However, things started to slide in the early years of the 13th century, when Crusaders sacked the city in a bid to splinter the Greek Orthodox Empire.

The Era of the Turks

In 1453, the Turkish Sultan Mehmed II took Constantinople, executing the last Roman Emperor (Constantine XI) and proclaiming it the Ottoman Empire's new capital. His first act was to summon a Muslim leader to convert the Hagia Sophia cathedral into a mosque. The history of Istanbul as it is known today began with this significant act.

Istanbul was quickly transformed from the centre of Christianity to a hub of Islamic power. The reign of Suleiman the Magnificent / Kanuni Sultan Suleyman (1520 to 1566) was particularly impressive, as the city blossomed into a global centre of Islamic culture and learning. The Suleymaniye Mosque was built during his reign and the city's population rose to more than half a million by the latter part of the 18th century.

The Tanzimat Period of History

At the beginning of the 19th century, a wave of rebellion against the old ways of thinking swept over Istanbul. The forward-thinking Sultan Mahmud II began to align the city along Western European ideologies. This led to the Tanzimat Period, an era of integration between east and west. The history of Istanbul during this time saw great changes - it was connected to Europe by rail in the 1880s and bridges were built spanning the Golden Horn.

This progressive wave evolved into the Young Turk Revolution in the early years of the 20th century, effectively deposing the Ottoman Empire forever. Istanbul was caught in the middle of a series of conflicts, with WWI proving the deciding factor in the handover of the Ottomans to the new regime under Allied forces.

Mehmed VI, the last Ottoman Sultan, was removed in 1922 and within a year, a new Turkish Republic had been formed by Mustafa Kemal Ataturk. Although Ataturk named Ankara as Turkey's capital, Istanbul enjoyed a boom of infrastructure that witnessed the creation of Taksim Square, as well as a number of grand boulevards and various other European-style urban plans. 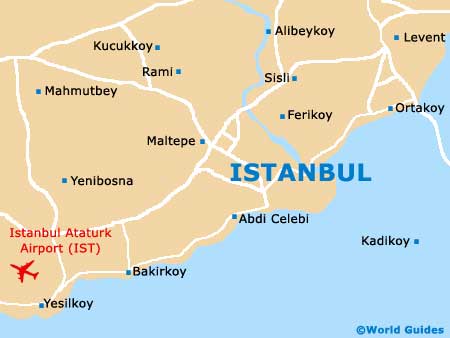