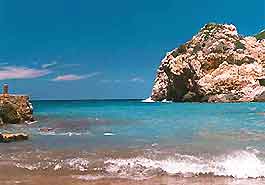 Mallorca has long been a leading summer holiday destination and its plentiful attractions cater well to the requirements of tourists visiting this large Mediterranean island, with many being conveniently close to the main beaches and resorts. As the capital, Palma de Mallorca is where a large proportion of the island's tourist attractions are based, particularly around its historical centre, the Placa d'Espanya, the Placa Major and lively harbour.

Spread all over the island are a series of often spacious caves, which provide something quite different to explore, away from the beaches. Families with young children holidaying on Mallorca will find that the most appealing tourist attractions come in the form of Aquacity and its numerous water slides, and the Marineland theme park, where friendly dolphins and sea lions await.

Walking tours in Mallorca provide an ideal way to see many of the attraction and gain a real insight into the history of the island. 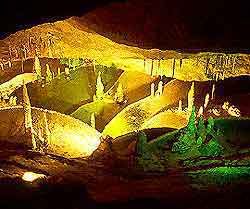 Mallorca is famous for its wonderful caves, which have become a popular attraction all over the island. The caves feature impressive underground lakes, enormous stalactites and stalagmites, and simply vast, cavernous spaces. There are over 200 caves in total, with many providing shelter for early settlers, although only a small amount of the island's caves are actually open to the public. Guided tours are available and the caves often feature steps and walkways. Caves with lakes offer wonderful acoustics and sometimes short concerts are held in these caves.

Address: S'Arsenal, Mallorca, Spain
Tel: +34 971 440 0000
Aquacity is situated the resort of S'Arsenal in Mallorca, a little to the east of Palma. With several large pools, fast and exciting slides and playgrounds, Aquacity is an extremely popular tourist attraction for children.
Open hours: daily, July to August - 10:00 to 18:00, September to June - 10:00 to 17:00 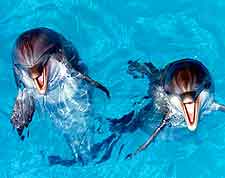 Address: C/Gracillaso de la Vega 9, Mallorca, Spain
Marineland is one of Mallorca's most popular tourist attractions and is the only amusement park in the Balearic islands to feature performing dolphins and sea lions. The dolphins in Marineland are without a doubt the stars of the show and their regular displays of leaping acrobatics never fail to attract crowds. Marineland has many other attractions apart from the dolphins, and these include the largest collection of sharks in the whole of Europe, a parrot circus, aquariums, crocodiles and a reptile zoo with large snakes. The park has a good breeding program and has successfully bred many of the animals in Marineland, including dolphins and sea lions.

Address: Palma, Mallorca, Spain
This large 19th-century square in Mallorca is pedestrianised and surrounded by restaurants, cafés and interesting tourist souvenir shops. In the centre of Placa Major there are often market stalls selling a variety of handicrafts and there is also a small stage where many musicians and general entertainers regularly perform. There is now a large underground shopping centre and car park at Placa Major, which provides an excellent range of shops.

Address: Palma, Mallorca, Spain
Mallorca's harbourfront at Palma is overlooked by the grand La Seu Cathedral. The harbour is always busy with yachts, boats and fishermen. Nearby is a good restaurant with excellent views and there is also a jetty for pleasure boats, where you can take your own trip around the harbour. There is also a ferry terminal that provides regular connections to the other islands and mainland Spain.

Address: Palma, Mallorca, Spain
The large Placa d'Espanya really is the transport hub of the island. In the centre of the square is an equestrian statue of Jaume I, Conquistador of Mallorca. The railway stations run regular services to Soller and Inca, and there are also many bus stops here, providing connections to the suburbs of Palma and tourist resorts. 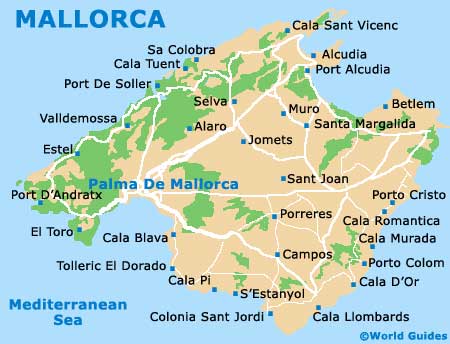