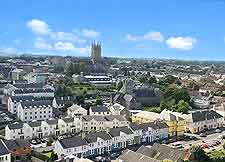 The Republic of Ireland's Kilkenny (Cill Chainnigh) is the most beautiful heritage city in the entire country, attracting a huge number of tourism arrivals every year. Its historic sites are concentrated in the city centre and easily accessible on foot. Kilkenny has been a focus for tourism for many years and in 2009 celebrated the 400th anniversary of its status as a city, boosting its visitor numbers still further.

Appearing more like a small town, the city is a treasure-house for architecture and history buffs, with many heritage buildings dating from Norman times through medieval and Tudor periods up to the 19th century, all within walking distance of city centre hotels, restaurants and entertainment venues. Accommodation options across this historic county are wide, ranging from traditional luxury and contemporary modernity to cosy pubs and B&Bs with traditionally warm Irish welcomes. Tourist information can be easily accessed at the Kilkenny Tourism Office in the 16th-century Shee Alms House on Rose Inn Street. 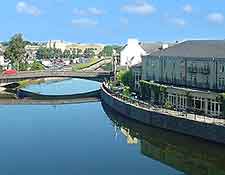 Many of the city's tourist attractions are packed with character, with churches and historic houses lining the winding streets, medieval city walls and the River Nore. Kilkenny Castle is especially grand and dates as far back as the 12th century, although it is clear to see that the castle has undergone many modifications over the centuries, with a number of prominent changes being made during the 19th century. 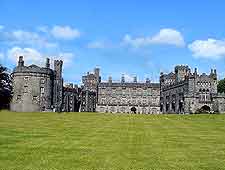 Guided tours of the castle's Long Gallery last around 40 minutes, during which time tourists will be able to admire both pre-Raphaelite and Celtic art works. Also worth visiting in Kilkenny is the Butler Dower House on Patrick Street and its fairytale turrets, while on Parliament Street you will find the Black Abbey and also the renowned St. Francis Abbey Brewery, where various different beers can be tasted and purchased. More information about Kilkenny Tourist Attractions. 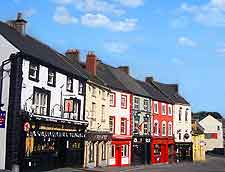 Apart from the castle, Kilkenny contains a number of additional landmarks, including no less than two cathedrals. St. Canice's Cathedral is especially impressive and Ireland's second-biggest, dominating the northern side of the city centre with its imposing Gothic architecture and tall 9th-century Round Tower. Considerably younger is St. Mary's Cathedral, which was completed in the middle of the 19th century and constructed using locally sourced limestone. Further interest for sightseers comes in the form of the semi-circular Kilkenny Design Centre, the Thosel building (formerly the city's customs house and guildhall), and the two famous bridges of Kilkenny - Green's Bridge and John's Bridge. More information about Kilkenny Landmarks and Monuments. 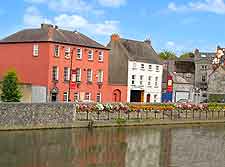 Although there is no denying that Kilkenny is a small city, it does come with a number of museums and similar cultural attractions. Close to the Black Abbey are the exhibits by the Kilkenny Archaeological Society at Rothe House, a 17th-century townhouse boasting Renaissance architecture and endless period features. At the Shee Alms House, the Cityscape Exhibit features miniature model houses and shows how the city once appeared, a few centuries ago. Further museums are to be found close by, in the neighbouring villages of Bennetsbridge and Tullaroan. For a taste of art, head to Kilkenny Castle on the Parade, where both the Butler Gallery and the National Craft Gallery will oblige. More information about Kilkenny Museums and Kilkenny Art Galleries. 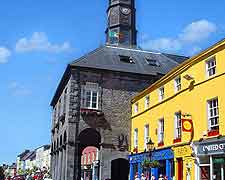 County Kilkenny occupies a charming part of Southern Ireland and many attractions lie within reach of the city, such as Grennan Castle, Jenkinstown Park, Jerpoint Abbey and the Kells Augustinian Priory. Also in County Kilkenny are the Dunmore Caves, where guided tours tell of the thousands of skeletons once unearthed here and the Viking battles that took place in this area. Close by are the counties of Waterford and Wexford, where further day trips are possible. Excursions to the small city of Waterford are especially popular and many of its attractions are based around the banks of the River Suir, where they are accompanied by a good choice of Irish pubs and restaurants. In the county town of Wexford, the recently redeveloped quayfront is central to the action. More information about Kilkenny Attractions Nearby. 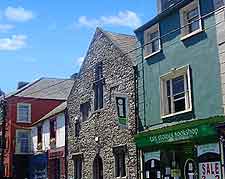